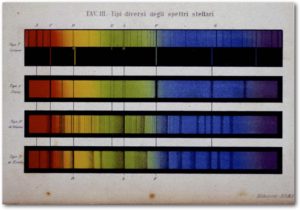 This plate is from Fr. Angelo Secchi SJ’s catalog ca 1870.

If you’ve seen the flash of yellow-orange flames when a pot boils over on a gas stove, you’ve gotten a glimpse of the ghost of an atom, specifically sodium.  The color is part of the atom’s spectrum, which shows which types or frequencies of light are absorbed by that particular atom.

In the late 17th century, Isaac Newton used the Latin word for ghost, spectrum, to describe the bands of colors he saw when light shone through a prism. In 1814 Joseph von Fraunhofer noticed he could see bright lines instead of the bands of colors when looking at certain flames through a prism.  He went on to develop an instrument to measure these spectral lines, called a spectroscope.

Fraunhofer noticed a series of missing colors, dark lines, when looking at the sun’s light through the spectroscope, and went on to characterize the light from several stars as well.  Fifty years later Jesuit polymath Angelo Secchi invented a series of spectroscopic instruments specifically for examining the patterns of colors in the light from stars and the sun and used them to build a catalog of more than 4000 stars.  Secchi classified the stars by recurring patterns in the light, which were a clue to the star’s composition.

Around the same time Secchi was building his catalog of stellar spectra, Gustav Kirchhoff and Robert Bunsen (the inventor of the ubiquitous Bunsen burner) were involved in a more down-to-earth scheme. Kirchhoff and Bunsen teamed up to create a spectroscope that used Bunsen’s new hotter, gas burner to ignite samples.  They noted that that when they combusted a pure element it produced a characteristic set of lines, a spectral fingerprint, that could be used to identify it.

In October of 1860, Kirchhoff and Bunsen announced they had used their spectroscope to discover a new chemical element, which they named cesium, for the blue color of its principal line.  Chemists quickly began to use Bunsen’s spectroscope to find new elements.  A few months later Kirchhoff and Bunsen found two bright ruby red lines in an extract of a silicate mineral lepidolite, the spectral traces of another new element, rubidium.

Thallium’s ghostly green emanations were first observed by William Crookes, indium, ironically named for its violet lines by its color blind discoverer Ferdinand Reich.  Paul-Émile Lecoq de Boisbaudran spectroscopically painstakingly identified element 66 in a sample extracted from his marble hearth, and instead of naming it for the colors of the lines, called it dysprosium, from the Greek for “hard to get” — because it was.

Hunting for new elements spectroscopically meant you didn’t actually need to have any of it in your lab or even on your planet, as long as you could observe the light from a burning sample.  In 1868 several chemists and astronomers independently observed a faint line in the spectrum of the sun, and assigned it to a new element, helium, which as far as they knew did not exist on earth.  It would take nearly 30 years for two Swedish chemists to confirm that it was present on earth — by matching the spectrum with that of a gas found in a uranium ore.  (All the helium found on earth comes from radioactive decay.)

These ghostly lines produced by elements helped fuel yet another critical discovery that would have far reaching consequences for chemists’ understanding of the periodic table:  quantum mechanics.  Niels Bohr’s quantum mechanical model of the atom opened the door to explaining the line spectra of chemical elements. Though more accurate and sophisticated quantum mechanical models of the atom now exist, Bohr’s model showed the relationship between the lines and an atom’s electron by insisting that the electrons’ energies were quantized, that is, they could only have certain energies.

So why do atoms have ghosts?  When an atom is heated to high temperatures, as in a flame or a star, the energy it absorbs excites its electrons.  You can think of the electrons in an atom as being on an energy ladder. (this isn’t quite correct as far as the quantum mechanics goes, but it is a reasonable approximation and easier to visualize.)  They can only have energies that match the rungs of the ladder, and each type of atom has a unique arrangement of the rungs.

When an atom absorbs energy, its electrons move to higher rungs.  Excited electrons are unstable. They quickly return to their original arrangement, giving off some their excess energy in the form of light as they fall back to their original rung.  The color (the wavelength) of the light emitted depends on the difference in energy between the rungs.  The colors of light emitted are the ghosts of the energy rungs.  Since each element has a unique pattern of rungs, it will have a unique spectrum of emitted light and so revealing their presence to the sharp eyes of spectroscopists.

The spectra that Secchi so carefully observed (and hand drew!) were not just a way to identify a particular star, but clues to its chemical composition and even more critically to its evolution. Chemists and astrophysicists still use the light emitted and absorbed by atoms and molecules to identify their presence.  We hunt for the structure of the universe in its ghosts.

If you want a way to see the ghosts of atoms for yourself, try this inexpensive DIY folding spectroscope you can attach to your phone. Use it to check out the light from a neon sign or from a street light!

For a wonderful description of the elements, including stories of how they were first discovered, read John Emsley’s Nature’s Building Blocks.

This post is a version of an essay written for a collection commissioned for the UN’s International Year of Light in 2015, and is cross posted at Quantum Theology.