I have had Jon Larsen’s  In Search of Stardust on my stack of books to read because last spring the upper division research methods course I taught did an experiment to measure the heat capacities of meteorites, using the method developed by the Vatican Observatory’s Guy Consolmagno, SJ and Bob Macke, SJ and colleagues. The students were curious about the astrochemistry context (where do the samples come from, how can you distinguish regular rocks from these stony aliens) and I’ve been collecting resources for this coming spring when a new batch of students will make these measurements. 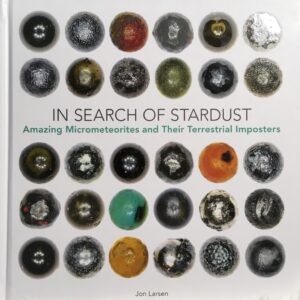 I tend to think of meteor strikes as spectacular and rare events, fireballs roaring through the sky that finally come crashing to earth.  Still they aren’t as rare was you might think — tens of thousands of meteorites weighing as much or more than a euro coin hit the earth’s surface each year, most of them landing in the water.  It gives me a visceral sense of how big the earth is! But what takes my breath away are the hundreds of trillions of micrometeorites that come to rest on earth each year, adding as much as 100,000 metric tons to the earth’s mass.  Invisible, unremarked.  Perhaps as many as one a day hits the roof of my house, there are surely some of these ancient bits of dust in the water I drink, still others stuck to my hands after weeding the garden.

Larsen, a Norwegian jazz musician and visual artist, discovered that you could find and identify these micrometeorites by looking at the dust on urban roofs.  Previously it had been thought it wouldn’t be possible to find or identify these microscopic objects from outer space amidst the general detritus of a city. But Larsen’s careful eye is rewarded, as these cosmic intruders have a characteristic morphology. Their unique appearance means you can sort them out under a microscope, much like Pasteur manually sorted the crystals of tartaric acid. And they are astonishingly beautiful. 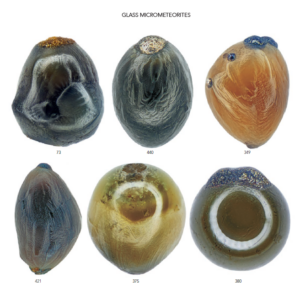 From Jon Larsen, In Search of Stardust, p. 51

Larsen offers a brief and readable glimpse into the science of micrometeorites, but I also enjoyed simply browsing the images, reading them as I might clouds.  There is a golden glass meteorite with deep blue inclusions (p 51) that looks like some alien aquatic creature’s shell, while the burnished cryptocrystalline specimen on page 45 looks like a bronzed wasp’s nest — until one remembers it is only a few tenths of a millimeter across.

As much as I learned about the dust from outer space, Larsen’s compendium of the terrestrial imposters (it’s important to know what you aren’t looking for!) gave me an entirely different view of road dust, containing polished spheres of glass from the reflective markings on the roads and crystals, microgemstones.

In one of the most beautiful passages in Isaiah (Is 54:11-12) we hear, “I lay your pavements in carnelians…” Who knew it was literally true.  The world is a beautiful place, if only we know where and how to look.

In Search of Stardust: Amazing Micrometeorites and Their Terrestrial Imposters by Jon Larsen (Voyageur Press, 2017)