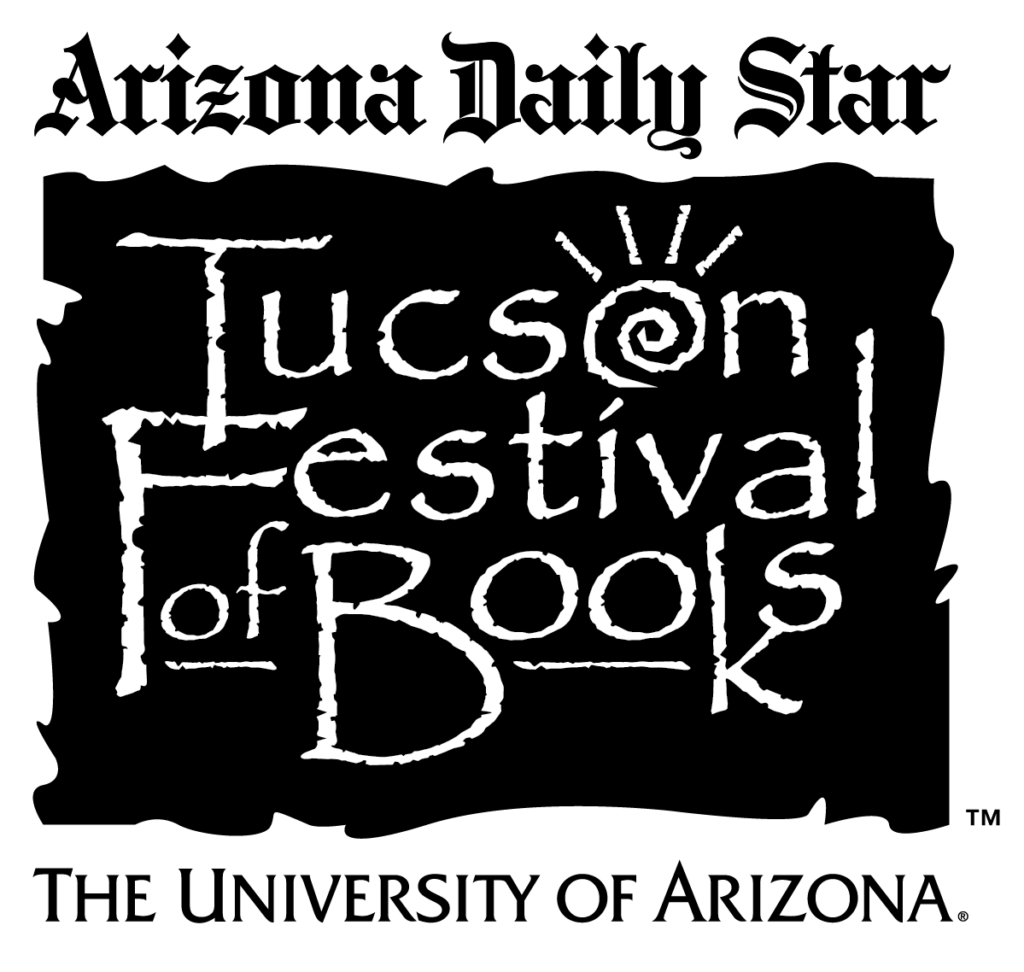 The world of EPO (Education and Public Outreach) is an amalgam of formal education, informal education, and public outreach, with frequently blurred lines between the last two categories. Dr. Sanlyn Buxner, an Education and Communications Specialist and Research Scientist at Planetary Science Institute, described the categories for us as follows:

“Education is about increasing someone’s knowledge or skills (whether it is in a formal or informal setting). Outreach is more about letting people know about things, talking about a mission, etc., but is not necessarily about teaching them anything.  It may be about having fun, raising awareness, etc.” 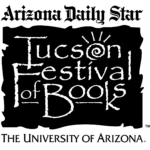 The Tucson Festival of Books (FOB) takes place at the University of Arizona (UA) in March.

FOB began in 2009 with an estimated 50,000 visitors; 2019 was the Festival’s eleventh year, with an estimated 140,000 visitors over two days. FOB includes literary awards, food, entertainment, vendors, and presentations by authors and panels in all fields. This year, 330 authors presented. In FOB’s first 10 years, $1.8 million was donated to local literacy organizations. 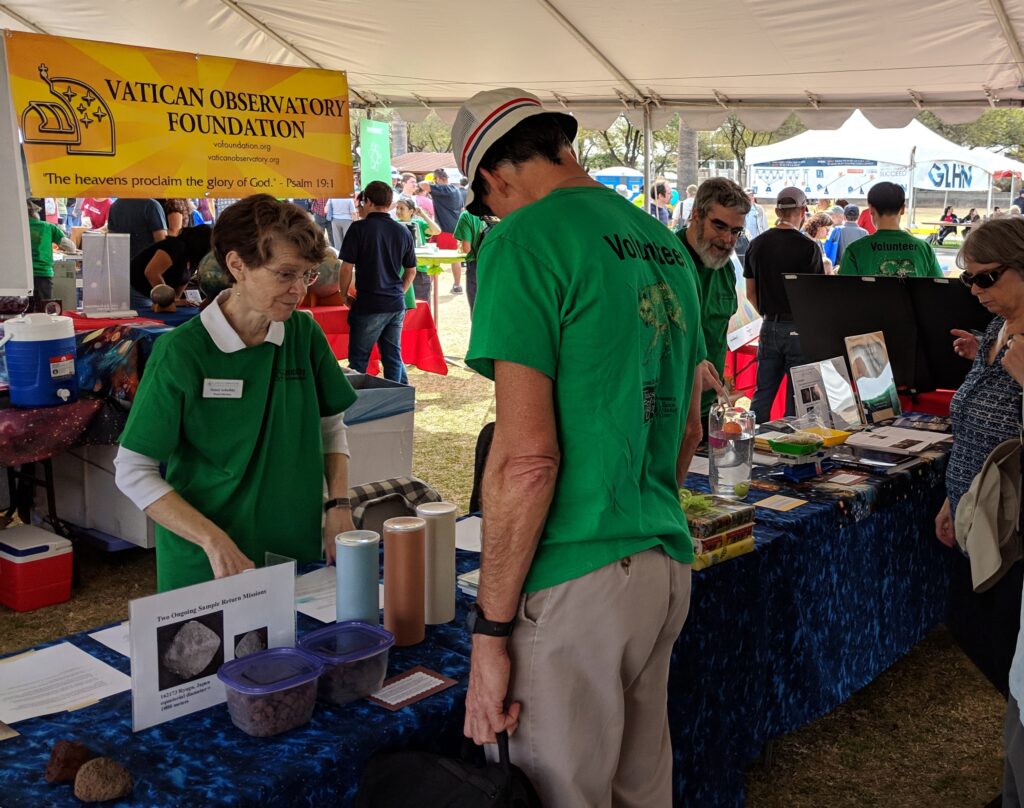 Science City, located at the east end of the UA mall, is where the Vatican Observatory Foundation (VOF) presents. Science City began as one tent in 2010. Now there is a mix of tents, tables, a performance stage, and a food court.

This year there were 73 university departments, math and art organizations, private industry, and government agencies represented. There were telescopes for viewing, a variety of speakers, hands-on activities from many science disciplines, lots of “acoustical” kazoos, and the occasional spectacular, one-story-high exploding water cannon. Add to this meteorite displays, bottle rocket launches, virtual tours of the MMT and Whipple Observatories, math activities, gardening, nutrition, insects, aquaponics, water resource management, reptiles, and creating a cloud in a jar — something for everyone.

If you think it sounds like a three-ring circus, there is literally a one-ring circus performance area right next to the food vendors. Volunteers who put in 4-8 hours at the VOF tables inevitably talk themselves hoarse, not just from the number of folks who visit our display but from the noise level of this very lively environment. 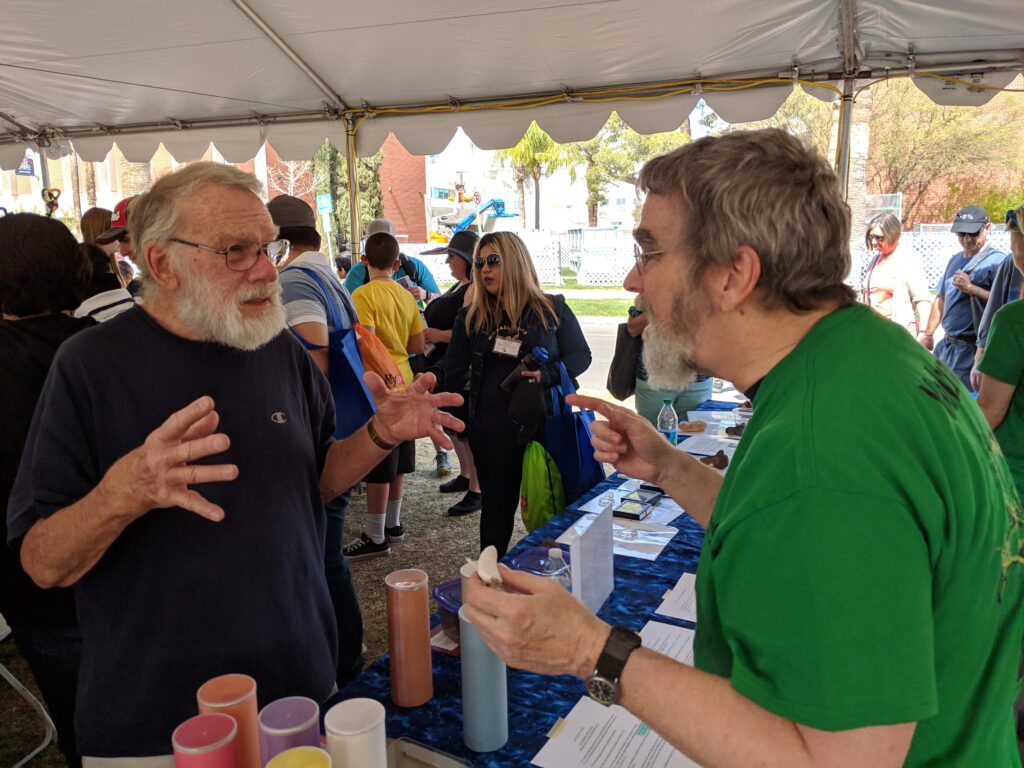 Br. Guy engages with a Festival of Books visitor about the work of the Vatican Observatory. Credit: Larry & Nancy Lebofsky
The VOF Tables

VOF is allotted two 6-foot tables at FOB. Half of the first table contains brochures, bookmarks, a sign-up sheet for the VOF mailing list, and other Foundation materials. The rest of our table space is devoted to science information and hands-on activities. Our theme for 2019: “Weigh to Go. It’s What’s Inside That Counts.” Each activity had an information card for those who wanted to try the activity on their own, but most visitors interacted with volunteers who guided them through the activities.

Our first science display compared a one-ounce rock and a one-ounce bag of Cheerios set on a balance. Conclusion: objects with the same mass are not necessarily the same volume or density.

Our second display was a pitcher of water with three same-sized plastic eggs. One floated on top of the water, one sank to the bottom, and one floated just below the surface of the water (a floater, a sinker, and a “flinker”). While the eggs were the same size (volume), their interiors contained “objects” with different densities.  Conclusion: objects that are the same size/volume can have different densities if their cores have different compositions.

Our third display was comprised of three wrapped birthday gifts, all boxes the same size and containing gifts of approximately the same size, but with very different composition/density. Visitors to the booth were encouraged to pick up, shake, and compare the boxes to determine which had the highest, middle, and lowest density. They were then asked to guess what might be inside each box. Conclusion: don’t choose the gift with the lowest density, it contains two pairs of socks! 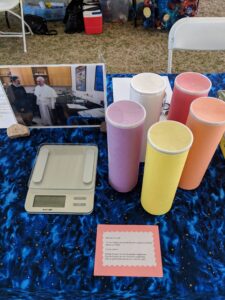 The fourth display included an electronic kitchen scale set to grams and 5 Pringles® cans wrapped in different colors of construction paper. Participants were encouraged to lift the cans and arrange them in order from lightest to heaviest. Volunteers asked participants to guess what was in each can, guiding them when necessary. The cans contained materials of different densities: air, Styrofoam packing peanuts, Pringles chips, vesicular basalt, and river rocks.

The fifth display featured photos of the asteroids Bennu and Ryugu to scale. Three wrapped Pringles® cans represented the densities of water, carbonaceous chondrites (the composition of Bennu), and the actual density of Bennu.

The sixth display included two clear plastic cylinders, one filled with small pieces of basalt and one filled to the same level with larger chunks of basalt. When the cylinders were lifted, the cylinder with the smaller pieces was noticeably heavier, while the cylinder with the larger pieces was described to participants as less dense. Guided inquiry led most observers to realize that the larger pieces of rock had more space between them, hence less density overall. The cylinders provided a second visual representation of the difference between a rubble pile and tightly packed rocks. 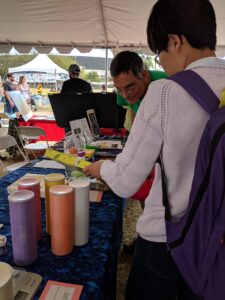 The standard advice to “know your audience” is almost irrelevant in this venue.  Much more useful are the abilities to adapt to an audience that changes rapidly over the course of two 8-hour days, and to assess quickly the interest level of each new visitor. Folks who are just passing by and are not interested in the scientific explanations behind the demos require a smile and a greeting. A quartet of rowdy siblings can be replaced in moments by a retired professor who is amused when asked by a volunteer, “Do you know what density is?”

Volunteers need to be sensitive to the tiniest visitors who may need help lifting a Pringles® can full of river rocks, not to mention placing it safely on our scale, as well as to young visitors who want to shake too vigorously, pry open, splash, and otherwise demolish our hands-on demos! Parents range from interested and supportive to nowhere in sight, ranging from a few who translate for their children and let the children think through their answers to those who so want to see their child to succeed that they give the answers instead of allowing the little ones a minute of thinking time. Bending across the tables to hear the softest, tiniest voices provides a good stretching opportunity for the volunteers. 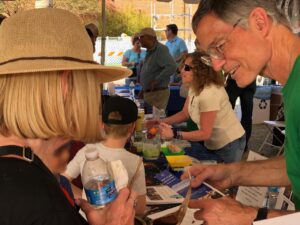 Engaging with and making the demos meaningful to a preschooler requires a different approach and length of contact than guiding older students with more content background, a higher interest level, and a longer attention span. We’ve known for years that the youngest visitors are far more fascinated by the push pin magnets than the meteorites attracted to the magnets. This year we added to that knowledge base when we discovered that all age groups were fascinated with our electronic scale. We’ve had one in our home kitchen for decades, use it every day, and never realized what a source of wonder and entertainment it could be!

While our bright yellow VOF banner, book marks, and brochures draw many comments and questions, one of the most interesting was a gentleman who asked, “When you say Vatican Observatory, do you mean the telescope on Mt. Graham near Safford? I live in Safford!” He seemed very pleased to have his area of Arizona represented so prominently. In past years, we have also attracted the occasional confrontational visitor who questions why the Vatican supports astronomy. This year one very pleasant visitor wondered, “If you’re scientists, why do you teach creationism?” Fortunately, Bro. Guy was on hand to respond!

In general, VOF does outreach at FOB, talking to visitors about the work of the Vatican Observatory and raising awareness of science concepts and new discoveries. However, some of us are natural-born explainers, so informal education is always part of the VOF activities. Many thanks to our fantastic volunteers: Bro. Guy, Fr. Chris, Fr. Jean-Baptiste, Fr. Justin, and Michelle Cournoyer from the Steward Observatory VO office! 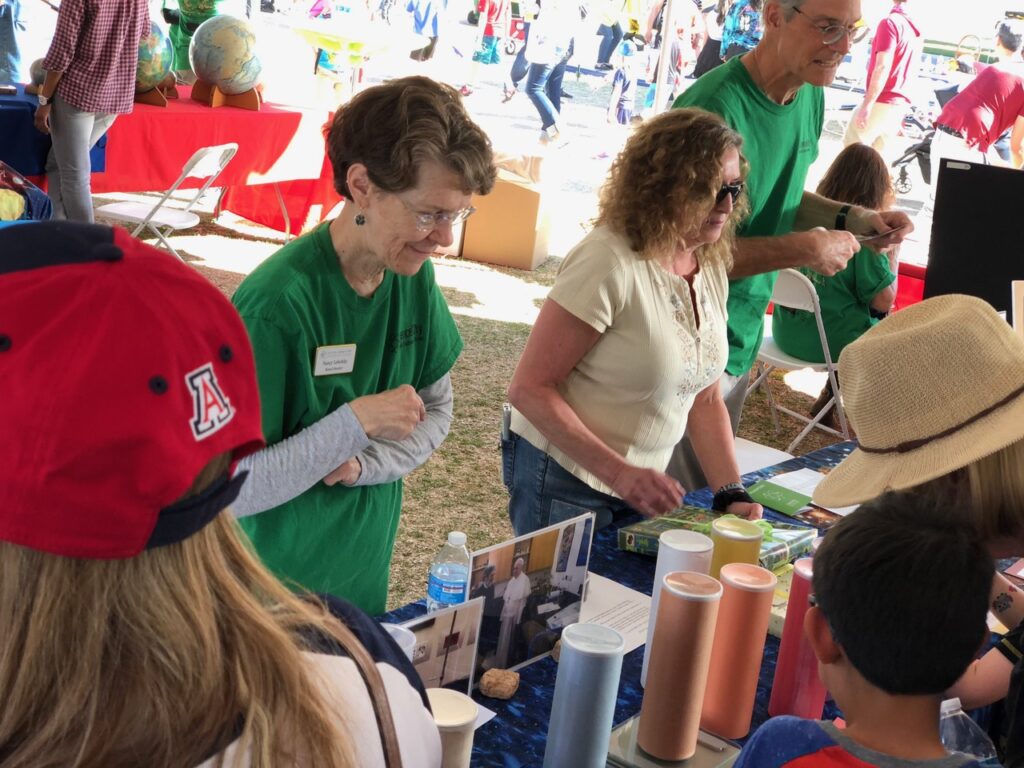