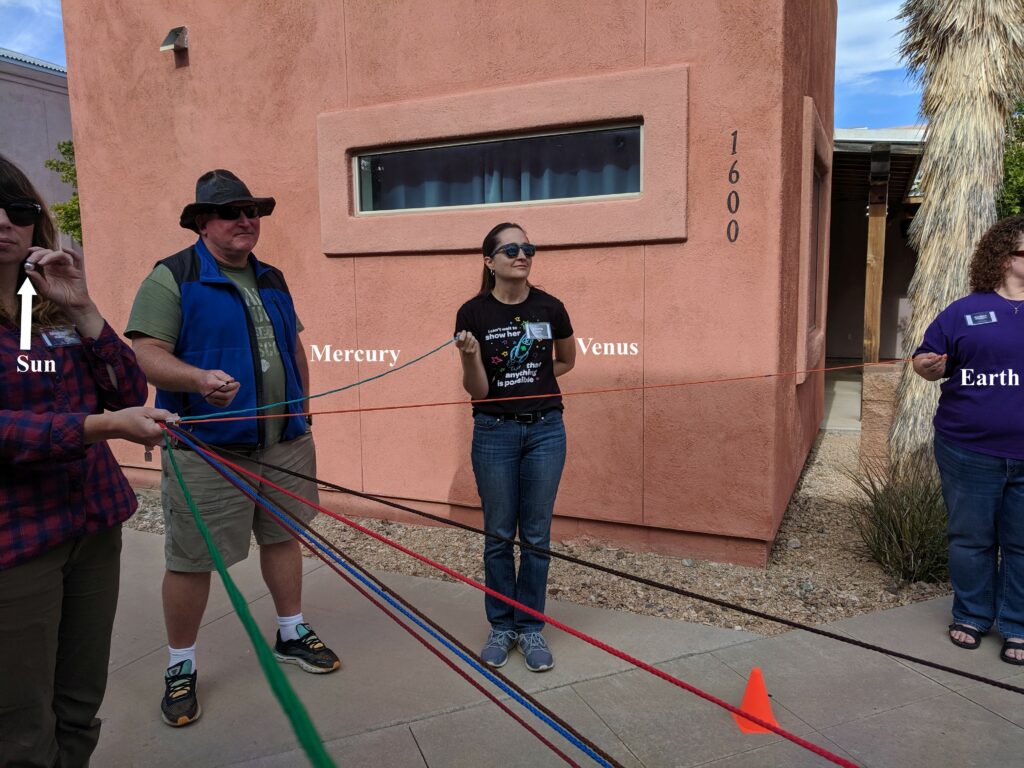 My December blog (The Headless Angels and the Four Science Concepts) dealt with science concepts in general, and concluded with a brief discussion of size and distance models of the Solar System. Larry and I developed the models many years ago for use in teacher in-service training workshops. The updated activities described below are now being used for Girl Scout Adult Leadership Workshops under the auspices of a NASA-funded program, Reaching for the Stars: NASA Science for Girl Scouts.

SIZE MODEL 1: The Diameters of the Planets

Planetary scientists sometimes use the Earth as a reference point in making measurements. For example, the distance between the Earth and the Sun is called an Astronomical Unit, or AU, and is used to describe distances in the Solar System. Another example is Earth’s atmospheric pressure (14.7 lb per square inch); it is referred to as one atmosphere (1 atm), and the atmospheric pressures of the other planets are sometimes expressed in this unit. In the following tables, we use Earth’s diameter and Earth’s distance from the Sun as base units for constructing scale model diameters of the planets and scale model distances from the Sun to the planets.

Materials for Size Model of the Solar System:

You will need about 11 participants for this activity. Ask which star is closest to us. They should answer the Sun. Have one person (about 5 feet tall) stand to the left of what will eventually be a line of 11 representing the Solar System.

Next, ask which planet is closest to the Sun. The participants should answer Mercury. The one who answers first should become Mercury and stand next to the “Sun.” We usually do left to right as you are facing the participants since that is the way one usually sees the Solar System illustrated in books. Hand that person the bead  that represents Mercury. Explain to them that you are creating a scale model of the sizes of the planets in the Solar System.  Continue this with Venus, Earth (and the Moon), Mars, Jupiter, Saturn, Uranus, Neptune, and Pluto. Note: There is still disagreement as to how one should classify Pluto, based on its physical properties (atmosphere, active surface, etc.) and not on just its size and location in the Solar System. Many planetary astronomers still consider Pluto to be a planet. Just a small one!

Table I shows the names of the Sun/planets and their true diameters (in miles and kilometers). Column 4 is to be used for determining the sizes of the planets relative to Earth (Earth = 1.0). Column 5 is to be used for determining a scale model of the planetary sizes relative to a 1.28-cm (0.5-in) Earth. This is the scale model that we will use in class. This is a 1:1,000,000,000 scale where 1cm represents 10,000 km. The units in the last column are given in either inches or millimeters and relate to the sizes that one can find in a crafts shop.

Remind participants that this is just a scale model of the sizes of the planets. Ask them what the beads and Styrofoam balls represent (the relative sizes of the planets). Then ask them what is not represented by this model, i.e., what is not modeled accurately (planets are not in a straight line and  their distances are greater than in this model).

The inner Solar System with the Sun to scale.

Materials for Distance Model of the Solar System:

You will need at least 10 main participants for this activity. Others can represent as many asteroids and comets as needed. If you have just done the size model, ask the person who was Mercury to get in front of the “Sun” and walk away from the Sun to what they think is the “correct” distance (based on the size model) from the Sun. Have the others coach them to get the “correct” distance. After a few guesses, tell them that, on the size model scale, Mercury would be almost 200 feet away and Pluto would be over four miles away. Therefore, you are going to use a smaller scale model to represent the distances to the planets.

The next part of the activity is best done outside. The person who was the Sun should be given the ½-inch bead. Explain that this bead now represents the size of the Sun, 1/100 the original scale.

Next, ask which planet is closest to the Sun. They should answer Mercury, as before. The one who answers first should become Mercury. Hand that person the string that represents the distance to Mercury. Explain to them that you are creating a scale model of the distances to the planets in the Solar System.  Continue this with Venus, Earth (and the Moon), Mars, Jupiter, Saturn, Uranus, Neptune, and Pluto. Have them go out in different directions with their macramé, and either ask them or tell them why they are doing this (planets are never exactly lined up in a row). Caution: “Pluto” will be about 200 feet away and it takes time to get there and even longer to rewind the macramé!

Table II gives the true (mean) distances of the planets from the Sun: Columns 2 and 3, in millions of miles and kilometers; Column 4, their distances in Astronomical Units (1 AU = the mean distance of Earth from the Sun); and Column 5, their distances in solar diameters (e.g., 107 Suns laid side-by-side would be needed to stretch from the Sun to Earth). Column 6, light time (minutes), gives the time it takes light to travel from the Sun to each planet (186,000 miles or 299,800 km in a second). Note: for the Moon, distances are from Earth, distance in Earth diameters, and light time from Earth.

Remind the participants that this is a scale model of the distances from the Sun to the planets in the Solar System. Tell them that, as they stand at the ends of the macramé and look back at the “Sun,” the bead is what the Sun would look like from that planet. Also, while they are not lined up in the real Solar System, the individual planets are all moving around the Sun at different speeds. Finally, on this scale, the next nearest star is about 250 miles away. For older students, you might mention that the orbits of the planets are not circular and that this model is showing just the average distances of the planets from the Sun.

MODEL 3: Faster Than the Speed of Light

In the Junior Space Science Investigator Badge Requirement Booklet, one of the activities is called “Find Your ‘Girl Scout Minute’” to create a girl’s personal unit of measurement. The Distance Model of the Solar System can be used in a similar fashion to demonstrate the time it takes to send a signal from the planets back to the Earth. Astronomers use the speed of light as a way of measuring the distances to the stars and to distant galaxies. A light-year is the distance the light travels in a year, 9.46 trillion km or 5.88 trillion miles. The nearest star, Proxima Centauri, is 4.24 light-years away! While we generally use kilometers or miles when we talk about distances in the Solar System, we can also use light-minutes. This measurement is important for astronomers who are sending instructions to and receiving data and images from spacecraft. If one sends a signal from the Earth to a rover on Mars, at the speed of light (299,792 kilometers per second or 186,282 miles per second) it would take anywhere from 3.0 minutes up to 22.4 minutes for the signal to reach the rover on Mars, depending on where the Earth and Mars were in their orbits around the Sun. In this activity, we will send signals from each of the planets that are beyond the Earth so that they all reach the Earth at the same time. In astronomy, we call this “lookback time”—when we receive the light from a planet or star, how long did it take for that light to get to us? In the case of Proxima Centauri or a planet in orbit around it, this would be 4.24 years! Planet to Sun light-minute times are listed in Table II.

Materials for Faster Than the Speed of Light:

In preparation for the activity, roll out and line up all the macramé strings in parallel lines as straight as possible. You may want to hold the near ends of all the strings with a rock to keep them from moving. At the end of the Earth string, put strips of tape around the Mars, Jupiter, Saturn, etc. strings. Move on to the end of the Mars string and put strips of tape at this distance around the Jupiter, Saturn, etc. strings. Continue this until you have put a strip of tape around the Pluto string to mark the distance of Neptune. Note: when you do this activity, you may find that the distances may not align perfectly from one planet to another. String stretches and when strung out, may not be perfectly straight or may stretch out a little. Assume that distances are accurate to about 6 inches to a foot. This is fine as the orbits of the planets are not circular and we are using only the mean distances of the planets from the Sun.

Explain to the audience that, once they get to their final locations, the person who is Pluto will “send a signal” (start walking back along the string) toward the Earth. Proceed with the activity as you would in the previous section. Once all of the strings have been unrolled, have two or three other participants put the cones out at the locations of the tape marks.

Once the cones are in place, tell “Pluto” to send their signal (walk back along the string). When “Pluto” gets to the first cone, Neptune’s distance, “Neptune”  should send their signal (start walking). They should continue doing this for Uranus, Saturn, etc. They should try as best as they can to keep the same pace (this is not a race) so that they arrive at the last cones at the same time and stop there. For most of them, they will only be at the distance of the orbit of the Earth and the Earth may be on the far side of the Sun. In reality, they would have to walk a little more to reach the Earth.

If there are enough participants, some of them can time how long it takes for the messages from each of the planets to reach the Earth. Next, calculate how fast they are going in this model Solar System relative to a real message going at the speed of light. We have done this twice and it took both Pluto walkers almost exactly a minute to walk from Pluto to the Earth. If you compare this to the light time in Table II, the walkers were going 320 times the speed of light (328 minutes minus 8 minutes)! 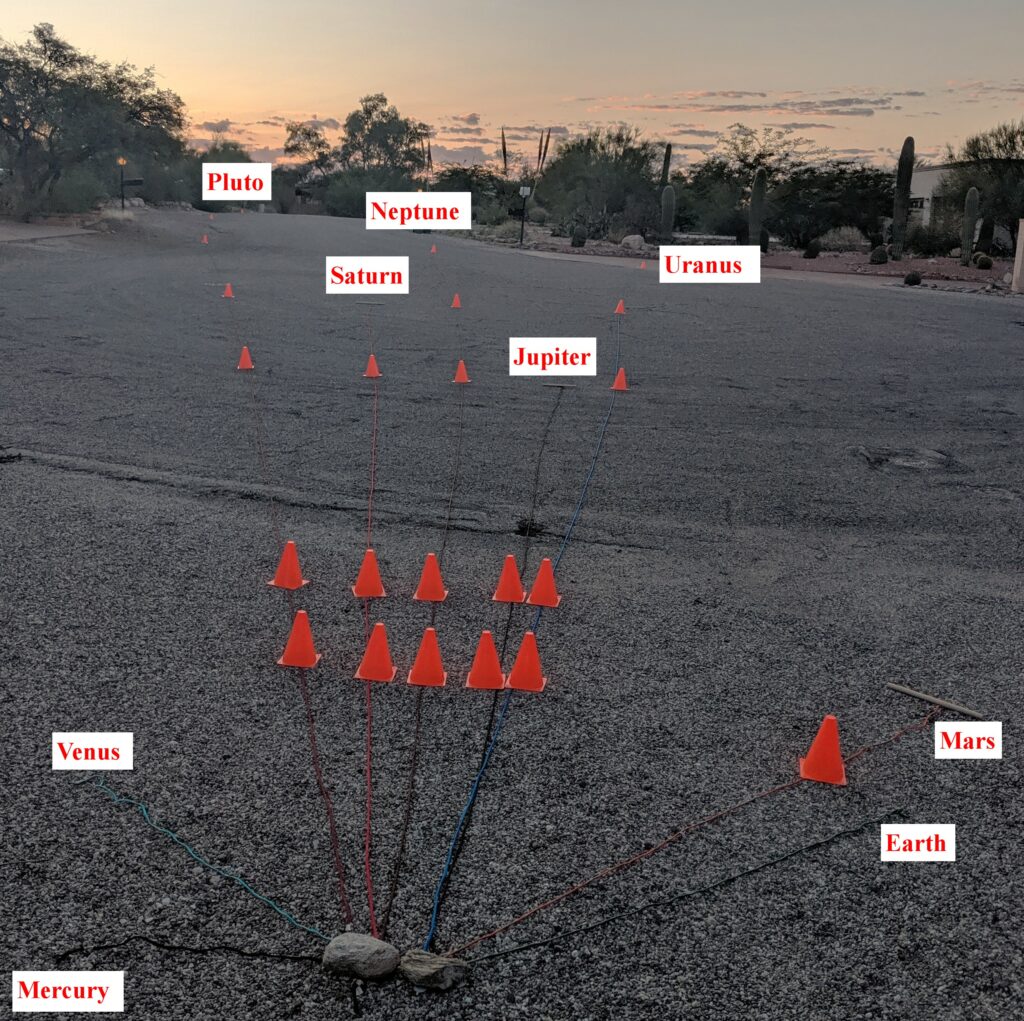 All of the planets, with sports training cones marking planet distances.

There are several lessons to be learned from the two scale models of the Solar System and the activity of sending a message to the Earth.