In an earlier blog, Howard Gardner’s theory of multiple intelligences was discussed, i.e., different learners have different skills, strengths, and talents. Accommodating these differences may require a more diverse approach when teaching the physical sciences. We have also discussed the place of narrative and storytelling in the sciences. Now we turn to the use of the arts in the science curriculum.

Where does your teaching style fit into the STEM vs. STEAM dichotomy? Or is there a “versus” between the Science, Technology, Engineering, and Math approach and the addition of the Arts into the overall teaching plan?

For a more detailed discussion of this topic, see Anne Jolly’s article “STEM vs. STEAM: DO the Arts Belong?” Ms. Jolly raises points from both “camps,” and then raises the question of how to include the arts “in an authentic way,” without diluting the focus of STEM education. Her list of how the arts can fit into STEM includes the areas of design, communications, and creative planning. She summarizes the purpose of STEAM as …”not [to] be so much to teach art but to apply art in real situations. Applied knowledge leads to deeper learning.” 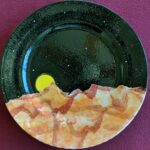 Integrated curriculum, then and now

Many decades ago (okay, let’s be honest: in a different century) our beloved fourth grade teacher, Miss Bachman, taught a Solar System unit. In addition to the names and characteristics of the planets, we learned the “current theory” of the formation of the Solar System. At the end of the unit, the class presented a play about the formation in which the tallest boy (the Sun) wore a makeshift cape with yellow crepe paper streamers attached. Each planet, in turn, would twirl across the stage, tearing off a streamer as they passed the Sun…and that represented the “current” perception of how the planets formed!

Whether or not  her theatrical endeavor would pass muster in today’s scientifically savvy world,  and whether or not Miss Bachman had ever heard of the concept of integrated curriculum, she certainly understood the use of the arts as a culminating activity for a science lesson. To her credit, the visual and dramatic aspects of her Solar System lesson remain a vivid memory 63 years later!

Teachers, especially in elementary schools, have long been masters of integrated curriculum, the predecessor, if you will, of STEAM. In simple terms, integrated curriculum refers to the practice of coordinating lessons in several subject areas around one theme. For example, during a science unit on birds, a teacher would coordinate the spelling list, math lesson, art project, and even her clothing and jewelry, if possible. 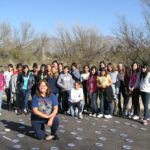 The finished human orrery and the girls who completed the project. Photo by L. Lebofsky. 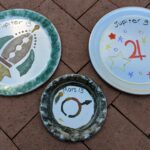 Hand-painted plates used to mark off planetary orbits in a human orrery. Photo by N. Lebofsky.

Since many of our workshops were specifically for teachers of grades K-8 and adult Girl Scout leaders, we developed a number of activities that combined an art aspect with a science concept lesson. In a collaboration between the Girl Scouts of Southern Arizona and Tucson’s Amphi Middle School, girls collaborated to build a human orrery. As part of the project, they decorated metal pie plates for each planet. The numbers (e.g., Jupiter 3) represent that plate’s position in Jupiter’s orbit around the Sun. The girls later paced out the entire Solar System.

The “Never-Ending Bear Hunt” story wheel illustrates the concept of circumpolar motion for young audiences, and allows the students to create a combined art/hands-on learning project from a large sheet of construction paper, a brass brad, and inexpensive paper plates (fancy paper plates have raised edges and are too stiff to rotate past the horizon line). 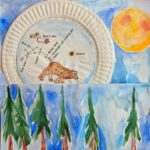 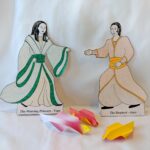 “Magpies and the Milky Way.” Photo by L. Lebofsky.

The activity that accompanies “Magpies Across the Milky Way” allows students to create an art project illustrating the Asian story of Vega and Altair (the Weaving Princess and the Herdsman) separated by a river of stars— the Milky Way—and eventually reunited one night per year by a flock of  magpies who form a bridge across the Milky Way. Students also learn to make origami birds, so the cultural aspect of the story is enhanced through art. The legend behind the story was discussed in detail in one of Larry’s earlier blogs.

This story is a perfect complement to a summer observing night. In addition to star and constellation identification, Vega and Altair are part of the asterism we call the Summer Triangle, probably a new concept for rookie observers.

Disclaimer: I have no artistic ability whatsoever. Yet I sincerely enjoy seeing the beautiful, imaginative, and inspiring projects created by students in pursuit of scientific understanding.

NEXT TME:  STEAM: Literature and Poetry

A Song of Stars, Tom Birdseye