When we think about STEAM (Science, Technology, Engineering, Arts, and Math), “Arts” refers not only to visual and performing arts but also to all aspects of literature: creative writing, poetry, fiction, and so on. Students, including teachers and Girl Scout leaders in workshops, can create their own myths or legends based on an aspect of astronomy.

“The Ball of Fire” by Maria Elena

A long time ago when only animals existed they had nothing to worry about. But then one day they found a giant egg, and from the egg a dragon came out and started throwing fire balls. All of the animals started running.

In those times the stars were cold and that’s why they were close to Earth. But when the dragon started throwing fire into the sky, all of the stars moved far away from Earth except for one that wasn’t strong enough to follow the other stars. The dragon threw a lot of fire balls at it. The star looked at herself and saw that now she was a very brilliant star that give light to Earth. The dragon couldn’t stand the favor he had done for the Earth so he threw himself at the star to put it out, but the light was too strong and so hot that it burned the dragon up. The star continued giving light to Earth and the other stars couldn’t get closer. Today we call this star our Sun.

They can create short stories, rap lyrics, one-act plays, and haiku such as the following written in response to observations of the 2017 solar eclipse. 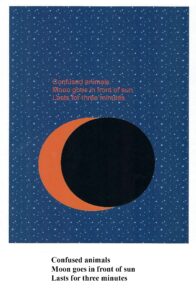 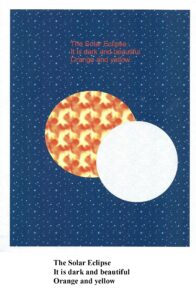 Poetry as a Response to Astronomy

Many a night from yonder ivied casement, ere I went to rest,
Did I look upon great Orion sloping slowly to the West.

Many a night I saw the Pleiads, rising thro’ the mellow shade,
Glitter like a swarm of fire-flies tangled in a silver braid.

Astronomy captures the imaginations of scientists and creative writers alike. In his book Shakespearean Quotations, G. F. Lamb identifies 197 topics that recur in the plays and sonnets of Shakespeare. He found 11 references each  to the Moon and day; 10 each to Earth, morning, night, and seasons; and nine each to stars and the Sun. Tennyson’s poem “The Lady of Shalott” alone contains nine references to day, night, galaxy, meteor, stars, and the Moon.

While Tennyson’s nineteenth century poetry may not resonate with today’s students (see the Reference section for somewhat more contemporary suggestions), there are several forms of poetry that allow students  to respond to what they have learned about astronomy topics. Examples from fifth and sixth grade students and teachers follow each format.

Format: two words to a line, any number of lines.

Solar System
One star
Nine planets
Many moons
Chunky asteroids
Traveling together
Through space
Through time
To where?
Until when?

Format: Choose the name of an astronomy-related concept. Each letter of the chosen word is the beginning letter of one line of the poem. For example, “Saturn” could be described as follows:

The Mouse with Wings” by Leah

There once was a mouse that had wings
at 6:00 she hears the dinner bell ring
So she flies in the sky
to the moon so high
she eats all the cheese and she sings.

“Man on the Moon” by Joe

I Used to Be/Now I am

We used several versions an activity proposed to us by two elementary school billingual teachers. Students begin with an illustration of a constellation, such as Scorpius, with the words “I used to be a scorpion” below the illustration. The same star pattern depicted in the constellation is repeated, but without the figure of the scorpion drawn around the stars. Students design their own constellation around the star pattern, then fill in the “now I am….” statement.

An extended poetry version asks students to create a poem describing the original and new constellations in the following format: 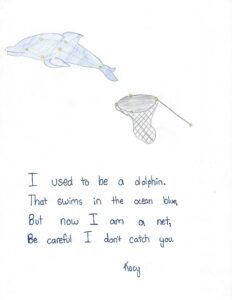 “Many, Many Stars” by Sarah

Sitting in the desert,
Looking at the sky,
So many stars,
I don’t know why.
Wondering how many stars there are,
Oh so many,
Oh so far.

Robert Frost, “Canis Major”
Langston Hughes, “Winter Moon”
Shel Silverstein, “The Planet of Mars” in Where the Sidewalk Ends
Shel Silverstein,”Shadow Race” in A Light in the Attic
SaraTeasdale, “Stars,” “The Falling Star,” and “Rhyme of November Stars”