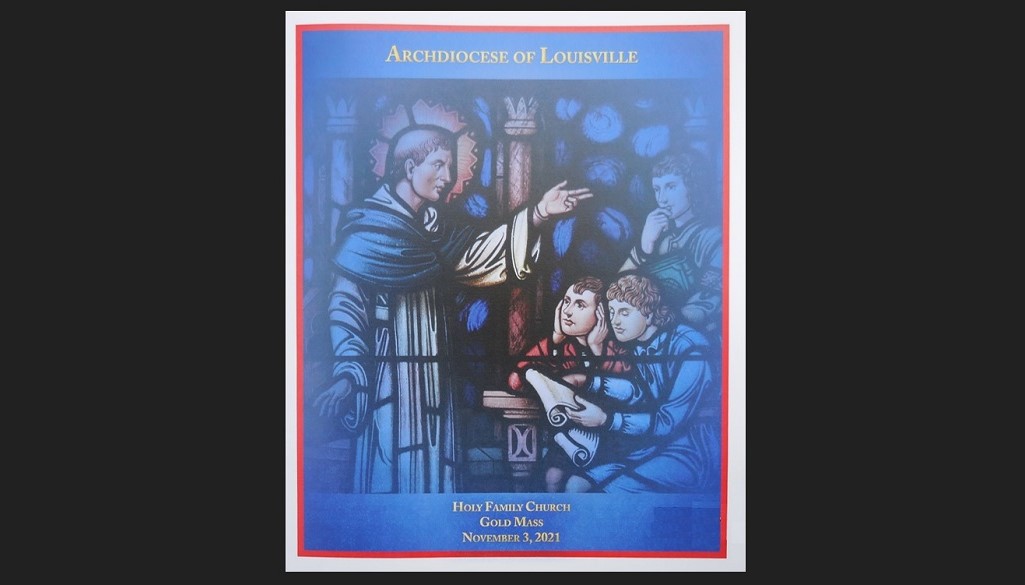 The Archdiocese of Louisville (Kentucky, USA) has seen its first Gold Mass for scientists, science educators, and science students.  I was there.

After the mass, there was a dinner—sponsored by the Louisville Section of the American Chemical Society (ACS)—in the Archdiocese’s Pastoral Center.  I was there, too.

At the dinner a scientist gave an address to all present.  I heard the address.

I edit the Faith and Science Resource Center here at VaticanObservatory.org, and I think this was one cool “Faith & Science” event!

The Gold Mass was on November 3 at Holy Family Church in Louisville.  The celebrant was Archbishop Joseph E. Kurtz.  Two priests with science backgrounds concelebrated—Fr. Pat Dolan (of the ACS) and Fr. Bill Fichteman.  The cross was born by Charlotte Tucker (also of the ACS).  The lector for the first reading was Gerry Williger, an astronomer at the University of Louisville (and a guest blogger here at Sacred Space Astronomy).  The reading was Wisdom 13:1-9:

Foolish by nature were all who were in ignorance of God,
and who from the good things seen did not succeed in knowing the one who is,
and from studying the works did not discern the artisan;
Instead either fire, or wind, or the swift air,
or the circuit of the stars, or the mighty water,
or the luminaries of heaven, the governors of the world, they considered gods.
Now if out of joy in their beauty they thought them gods,
let them know how far more excellent is the Lord than these;
for the original source of beauty fashioned them.
Or if they were struck by their might and energy,
let them realize from these things how much more powerful is the one who made them.
For from the greatness and the beauty of created things
their original author, by analogy, is seen.
But yet, for these the blame is less;
For they have gone astray perhaps,
though they seek God and wish to find him.
For they search busily among his works,
but are distracted by what they see, because the things seen are fair.
But again, not even these are pardonable.
For if they so far succeeded in knowledge
that they could speculate about the world,
how did they not more quickly find its Lord?

Archbishop Kurtz (also a guest blogger here at Sacred Space Astronomy) gave the homily, which you can hear below.

The dinner address was by Kate Bulinski, a geoscientist at Bellarmine University in Louisville (who just recently did a guest blog here).  Her topic was “Faith and Science: Compatible and Complementary”.  You can hear her address below. There were brief responses by me and Deacon Ned Berghausen (those are visible at the end of the video below). Then there was a question and answer session (not in the video), with Archbishop Kurtz joining in. Fr. Dolan moderated the whole thing.

The mass and dinner were well attended.  The Archbishop’s science discussion group was involved in organizing the dinner, and during discussions the subject of attendance came up and we asked ourselves “what if we get more people than we can handle?”  Well, it is a rare science event when you get more people than you can handle.  We decided to plan for a reasonable number, and if a huge crowd turned out we would just be thankful for the interest (and call in an order for some pizzas).  In fact, the dinner crowd was just about what the room could handle—maybe a little tight in a world of COVID (which, happily, was very much on the wane in Kentucky in early November).

Not everyone who went to the mass went to the dinner, so the mass attendance was even better.  Notably, there were a lot of young people present at both.  Much has been said about young people leaving religion in general and the Catholic Church in particular; “science” is often cited as a contributing reason for this.  The youth of the crowd then was a pleasant surprise.

Take time to listen to Archbishop Kurtz’s homily and Dr. Bulinski’s address.  This was an archdiocesan celebration of science.  It was done with the combined resources and participation of both the archdiocese and of the scientific community.  You don’t see this every day.

Indeed, where do you see it?  Is there another diocese anywhere that has done what Louisville has done?

If so, good.  But if not, and if you would like to see something like this happen in your diocese, go for it.  Louisville, Kentucky is not a place that has all the resources in the world.  So—if we can do it, you can do it!

Yes, I am most pleased with what our archdiocese has done. And, through my contribution, and the encouragement of that contribution from Br. Guy and Fr. Justin Whittington of the VOF, the VO has played a role in this, too.