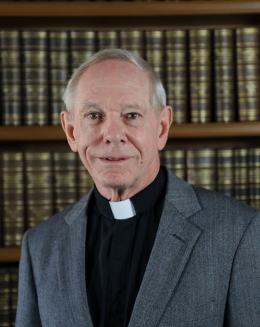 Two years ago, I wrote my first blog entry, entitled “Asteroids Named for Jesuits.”  It’s time for an update.

For those who don’t know him, Fr. Corbally is a member of the English Jesuit province. He joined the Vatican Observatory in 1983, and has played an important role in the research activities of our Tucson half of the Observatory.

His astronomical studies include multiple star systems, spectral classification of stars, -Boötis stars, and more. He has also studied human sentience in an evolutionary context, recently co-authoring a book on the subject: The Emergence of Religion in Human Evolution.

So, without further ado, here’s the updated list of Asteroids Named for Jesuits.  Note that I have added several that were provided by an attentive reader.  I remind everyone that the list is not exhaustive and there may be asteroids that I have missed. If you are aware of such a case, please let me know. 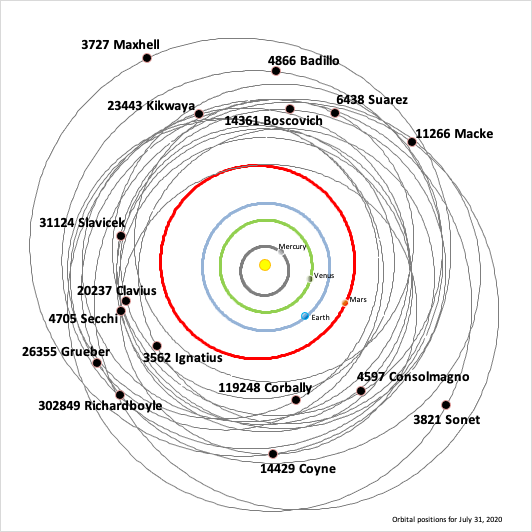 The following are citations taken directly from the Minor Planet Center database or the Dictionary of Minor Planet Names.

Named in memory of Maximilian Hell (1720-1792), famous for his determination of the solar parallax from his observations of the transit of Venus in 1769. Appointed director of the Imperial Observatory in Vienna in 1755, he prepared and published an important series of astronomical ephemerides.

Jean Sonet (1908-1987), a Belgian Jesuit, was a specialist in Romance languages, professor and later rector (1953-1958) of the University of Namur. From 1958 to his death he was Vice-Rector of the Catholic University of Cordoba (Argentina), where the discoverer met him.

Through experimental petrology, Guy Consolmagno (b. 1952) studied the origins of eucritic meteorites. As the curator of the Vatican meteorite collection, Guy’s more recent efforts have focused on determining the densities and porosities of meteorites and making comparisons with the densities of minor planets.

Named in memory of Angelo Secchi (1818-1878), Italian astronomer, director of the observatory of the Collegio Romano in Rome from 1848 to 1878. Famous for his work on stellar spectroscopy, he made the first spectroscopic survey of the heavens, and his classification scheme divided the spectra of the stars into four groups. Secchi also made an extensive study of solar phenomena and was a co-founder of the Società degli Spettroscopisti Italiani, now the Società Astronomica Italiana.

Victor L. Badillo (b. 1930) has popularized astronomy in the Philippines for more than three decades, inspiring countless Filipino astronomers. Ordained in 1965, he directed the Jesuit-run Manila Observatory in Quezon City and served as president of the Philippine Astronomical Society from 1972 to 1990.

Buenaventura Suárez (1678-1750), a Jesuit and pioneer native astronomer of the Rio de la Plata, established the first observatory of the region in San Cosme y Damian, where he made observations in particular of eclipses of Jupiter’s satellites. His Lunario de un Siglo included computations of eclipses and lunar phases.

Robert J. Macke SJ (b. 1974) is a research scientist and meteorite curator at the Vatican Observatory, whose fundamental contributions include studying the relationship between shock state and porosity in carbonaceous chondrites.

Ruggiero Giuseppe Boscovich (1711-1787), Jesuit professor of mathematics and philosophy at Rome and Pavia, was for some years in Paris and later in Milan, where he founded the Brera Astronomical Observatory. He wrote on the determination of orbits of comets, mathematics and optics.

George Coyne (b. 1933), S.J., has been an astronomer at the Vatican Observatory since 1969 and its director since 1978. He has helped with the completion of the large Vatican telescope on Mt. Graham, Arizona. His polarimetric studies have centered on cataclysmic variables, among other subjects.

Christopher Clavius (1538-1612) was a German mathematician and astronomer. He figured out where to place the leap years in the Gregorian calendar. Pope Gregory XII revised the Julian calendar with the assistance of Clavius.

Jean Baptiste Kikwaya Eluo (b. 1965) is a native of the Democratic Republic of Congo and Staff Astronomer at the Vatican Observatory. Using optical meteor measurements, he estimates the bulk densities of smaller meteoroids through numerical ablation models.

Johannes Grueber (1623-1680) was a Jesuit priest, missionary, mathematician and astronomer at the Chinese imperial court from 1659 to 1661. He returned to Europe from China by the overland route and published the very first travelogue describing Tibet.

Karel Slavíček (1678-1735), Jesuit missionary and scientist was the first Czech sinologist. Together with Ignatius Kegler he went to China in 1716. He worked on astronomy, mathematics and music and prepared maps of Beijing in 1718 and 1728.

Christopher J. Corbally S.J. (b. 1946) was ordained in the Society of Jesus and earned a PhD in astronomy. He continues a long career in astronomy where his contributions have included areas of multiple stellar systems, stellar spectral classification, galactic structure, star formation and telescope technology.

Richard Boyle (b. 1943) is an astronomer at the Vatican Observatory. His work has specialized in high-precision photometry of stars and stellar clusters, often using Vilnius system filters. His work has application ranging from asteroseismology to the discoveries of asteroids with the Vatican Advanced Technology Telescope.

Honorable Mentions:  These are not technically named for Jesuits, but are definitely influenced by Jesuits.

Named for the town in Spain, birthplace of Ignatius, founder of the Jesuits.

Ignatianum is the Jesuit University of Philosophy and Education in Krakow, Poland. This College is officially recognized by the state of Poland. In 1932, as the Faculty of Philosophy, it became a Catholic university.