Pope Francis’s new Encyclical, Laudato Si, may face quite a few problems in the United States because of hackle-raising expressions and images. Many good American Catholics will have trouble with some passages, and these problems will arise first and foremost from gut reactions to certain phrases rather than from carefully considered and thought-through divergence of opinion. 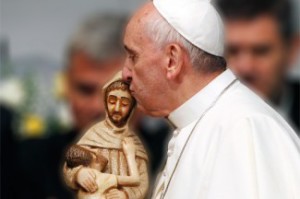 Pope Francis kisses a hand-carved figure of St. Francis given to him at a hospital in Rio de Janeiro. (CNS photo/Paul Haring)

I grew up behind the Iron Curtain, under a constant onslaught of propaganda. As a result, even today, 25 years after the fall of Communism, certain phrases raise my hackles. Take the expression, “the leading force in the society”. Everybody above 40 years of age from former Czechoslovakia knows it intimately. It is firmly associated in our minds with Article 4 of Czechoslovak Constitution of 1960, establishing the Communist Party as the “leading force in the society”. Many of us spent days in public squares demonstrating for its repeal in November 1989. With such historical baggage, the otherwise perfectly innocent turn of phrase simply cannot be used in any other context. It will take another generation or two before the phrase becomes free of controversial connotations.

I spent 8 years in France. It took me a while to understand why good French Catholics looked at me strangely when I spoke of family in the context of Catholic social teaching. They shivered and fidgeted, avoided the topic and never followed up on what I said. I found it strange because family was very important for Saint John Paul II. Finally, somebody took pity on me and explained that “Work, Family, Country” was the slogan of the pro-Nazi Vichy French State, and that many French Catholics still had trouble with the phrase.

After five years in the US, I am slowly realizing that American Catholics, and Christians in general, are deeply divided into two parties: the “liberals” and the “conservatives”.  Seen by a newcomer, this division is very strange. I have gradually found that each of the groups has its set of very clear-cut positions on a number of topics which have been subject of the local “liberal-conservative” controversy. Both parties are typically American pursuing activism and disregarding other forms of practice. Even prayer meetings in American parishes always focus on mobilizing issues, and never on God.

What is stranger still is the matrix of positions characterizing the two groups. For instance, the “liberals” are against pro-life activism and for green activism, while the “conservatives” are against ecologist activism and in favor of the pro-life movement. This matrix of mutually exclusive positions is a result of decades of controversy. When I first attended a certain discussion group in the US, I was asked a single question regarding one single issue, and from my answer everybody derived what my answers to all other questions must be. It took me years to understand that Americans saw the world through the optics of their “liberal-conservative” controversy, taking for granted the strange combination of positions that these two parties have embraced over the years. To most Americans it comes as a revelation that Catholics around the world do not see any logical reason why being pro-life would have to imply that you support the State of Israel or why being in favor of social welfare would have to imply that you support gay rights.

I suspect that each of the numerous occurrences of “the poor” in Laudato Si will very likely raise the hackles of the American “conservatives”. I suspect that they associate that particular notion with a strict but for them quite unacceptable opposition between “the poor” and “the rich”. To their way of thinking, it is the “liberals” who use and abuse this antinomy. The “conservatives” see nothing wrong with being rich. In fact, they tend to agree with the Evangelical Christians in their reading of the Old Testament where material prosperity is a sign of divine favor. Conversely, poverty signifies the absence of divine favor. What is more, it is a part of American (“conservative”) identity to believe that anyone in this country of “unlimited possibilities” may prosper if only one works hard enough.  Not surprisingly, many “conservatives” will not even take the time to disagree with the Encyclical seriously and cogently: their hackles will be raised after a first cursory glance at the text.

The obverse can be said for American “liberals”. They will not seriously and cogently agree with the Encyclical: a simple, cursory glance at the text will suffice for them to feel justified in their positions, including those questions the document does not address. They may automatically assume that the Pope must also be for the sacerdotal ordination of women, not strictly against divorce, etc. – “if only the Vatican bureaucracy let him say it”. The only point irritating the “liberals” is that Laudato Si is very outspoken against abortion (n. 120), stating that “the inalienable worth of a human being transcends his or her degree of development” (n. 136). The National Catholic Reporter’s Readers’ Guide to Laudato Si by Fr. Thomas Reese, S.J., buries this “conservative” theme altogether.

By contrast, the “conservatives” feel very much antagonized by most of the Encyclical. As a result, the “conservative” Catholics quietly pray for the Pope’s conversion (just as many “liberal” Catholics used to pray for the conversion of John Paul II; they gave up on Benedict XVI). The more outspoken “conservatives” have nothing good to say about Francis. (On June 16, with unfathomable logic Greg Gutfeld on Fox News accused the Pope of simultaneous Marxist and Malthusian leanings.)

My message is very simple: Read the Encyclical. It is a great inspiration to thank our Heavenly Father for the marvels of creation. It is really very good. If only you can get over your gut reactions caused by the historical baggage of certain phrases. And if you are American, please try to remember that the Pope is neither “liberal” nor “conservative”.