Thursday’s solemn Congregation of Cardinals Inquisitors coram Summo Pontifice (in the presence of the Supreme Pontiff) determined a number of action points. One of them was that Bellarmine would talk to Galileo. Historians differ as to what exactly happened because the official accounts of the event diverge in substantive detail. We shall return to the topic in the coming days. For the time being, suffice it to say, that on this Friday, February 26, 400 years ago, Galileo saw Bellarmine, as the latter reported the following Thursday, March 3, at the customary solemn Congregation of the Holy Office in the presence of the Pope: 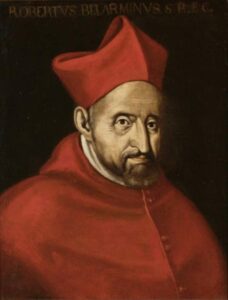 Most Illustrious Lord Cardinal Bellarmine [gave] the report that the mathematician Galileo Galilei had acquiesced when warned of the order by the Holy Congregation to abandon the opinion which he held till then, to the effect that the Sun stands still at the center of the spheres but the Earth is in motion […]. (Favaro, XIX, p. 278, trans. Finocchiaro, p. 148)

Let us return to Biblical exegesis. Take Brothers’ Grimm’s Hansel and Gretel. What is its message? What does it have to say about parents who want to rid themselves of little children by leaving them in the middle of a deep dark forest? Is the moral of the story that if you are in trouble you should steal, and when caught you should defend yourself to the point of killing the person from whom you stole? Obviously, we are not supposed to take fairy tales quite so seriously…

If you believe that the Bible is the Word of God, however, you have to take it seriously. There are two questions here. First there is the theological issue of Biblical inspiration. The Bible was obviously written by human scribes but faith tells us that they were inspired by the Holy Spirit. The question is, how did this work? Did the Holy Spirit put the sacred writers in a trance and they performed something like “automatic writing”? Or were the sacred writers writing pretty much like I do now, except that in the end Divine Providence saw to it that the texts which ended up in the canon of Scripture were the good ones? Or was it something in between?

The second question is more practical. How to interpret a given Biblical passage, considering that it is the Word of God?  It is not a new question, however.  One of the problems of Greek and Hellenistic thinkers was the interpretation of Greek mythology. Many of the myths (Greek mythos simply means “story”) had clear morals or lessons, but others were a challenge. An exegetic art was developed. The basic idea was that a text had three layers of meaning. In this, the Platonists argued, the text was an extension of the principle of unity of microcosm and macrocosm in which the human person had three souls (appetitive, spirited, and rational), and the society had three classes (artisans, warriors, and philosophers). The three senses of a text were literal, moral, and mystical or allegorical. This approach became an accepted standard.

The Jewish scholar Philo of Alexandria applied it to the Torah in the 1st century AD.  Christian authors of the Alexandrian school applied it to the Bible as a whole. It was the mainstream. In fact, you can see Biblical passages using this method on other Biblical passages. The most obvious example is Galatians 4:21-31 which provides an allegorical interpretation of Hagar and Sarah, the two wives of Abraham. There are many examples of this in the Bible which are less overt, e.g., when Psalm 1 says that those who “meditate the law day and night” are “like trees planted by streams” it may be taken as an allusion to the trees and streams in the Garden of Eden in Genesis 2. It is not just a nice metaphor: it is a reference. These connections become fairly clear once you know what to look for, and many Fathers of the Church practiced this art. In fact, they claimed that the literal sense of the text may be lacking in some passages so that the mystical sense might stand out more.

The first principle of traditional exegesis is that the Bible is a whole, bound together with innumerable internal references. The second principle follows, namely that the Bible has to be interpreted by the Bible alone. That means that a given passage needs to be interpreted as a part of a whole, with a particular emphasis on its links to the rest of Scripture. What is more, the literal sense of the text is not particularly important. We have four Gospels, giving diverging accounts of the events. They cannot all be literally true. This was clear to the earliest Christian thinkers, and they did not regard it as a problem because (1) they themselves understood that what matters is the moral and mystical sense, and (2) they knew that the society as a whole accepted this type of exegesis and the slightly incompatible fourfold Gospels would not raise many eyebrows among the general public.

This approach has been dominant throughout the history of the Church with several notable exceptions, including a relatively brief period around 1600…

As Ernan McMullin writes in his excellent paper:

Galileo had the misfortune to bring the Copernican claims to public notice at just the wrong time, a time when sensitivities in regard to questions involving scriptural interpretation and Church authority were at their most intense. (McMullin, p. 275)

Galileo himself tried to point out that great Christian authorities like Saint Augustine openly advocated abandoning the literal sense in passages like Genesis 1. Augustine even considered the relationship between Scripture and profane knowledge:

Usually, even a non-Christian knows something about the Earth, the heavens, and the other elements of this world, about the motion and orbit of the stars and even their sizes and relative positions, about the predictable eclipses of the Sun and Moon, the cycles of the years and the seasons, about the kinds of animals, shrubs, stones, and so forth, and this knowledge he holds to as being certain from reason and experience. Now it is a disgraceful and dangerous thing for an infidel to hear a Christian, presumably giving the meaning of Holy Scripture, talking nonsense on these topics, and we should take all means to prevent such an embarrassing situation, in which people show up vast ignorance in a Christian and laugh it to scorn. The shame is not so much that an ignorant individual is derided, but that people outside the household of the faith think our sacred writers held such opinions, and to the great loss of those for whose salvation we toil, the writers of our Scripture are criticized and rejected as unlearned men. If they find a Christian mistaken in a field which they themselves know well and hear him maintaining foolish opinions about our books, how are they going to believe those books in matters concerning the resurrection of the dead, the hope of eternal life, and the kingdom of heaven, when they think their pages are full of falsehoods on facts which they themselves have learnt from experience and the light of reason? (De Genesi ad Litteram, I, 19)

Why around 1600 in particular, even such men of high intelligence and erudition as Bellarmine were prone to cling to the letter of such very minor Biblical passages as the verse of the Psalm (a poetic form to begin with!), where the Sun is described as “running its course” (Ps 18:6)?  To be continued tomorrow.