On Thursday February 25, 1616, the solemn session of the Cardinals Inquisitors of the Holy Office presided over by the Supreme Pontiff took place at the Quirinal Palace. 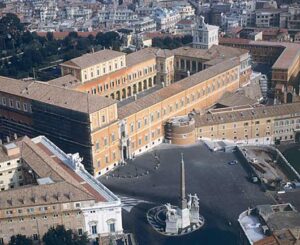 By the way, you probably know that the Quirinal Palace (photograph) was the principal residence of the Popes until the capture of Rome in September 1870. Five months later, it became the residence of the Savoyard Kings of Italy. I would like to point out that while the current Palace was commissioned in 1583 by Gregory XIII as a summer residence, it was Paul V Borghese (1605-1621) who augmented and completed it, and effectively moved the principal Papal residence there from the Lateran Palace, which suffered from “bad air”.

First, the Assessor (was it the Archbishop of Armagh Peter Lombard?) and the High Commissioner (Father Michelangelo Segizzi, O.P.), briefed the Pontiff and the Cardinals Inquisitors on the current matters, including the recommendations approved by the consultores et qualificatores at their plenary session on Wednesday. Then the two officials left, and the session proper was conducted in private. The extant minutes therefore concern only the third and final part of the proceedings, which consisted in the following:

The Most Illustrious Cardinal Millini [Secretary of the Holy Office] has notified the Revered Fathers and the Lords Assessor and High Commissioner of the Holy Office that His Holiness [Paul V], after having been informed of the appraisal of the Father Theologians on the proposition of the mathematician Galileo, to the effect that the Sun stands still at the center of the world and the Earth moves [around it and] also with a diurnal motion, ordered the Most Illustrious Cardinal Bellarmine to call Galileo before himself and warn him to abandon these opinions; and [he also ordered that] if he should refuse to obey, the Father High Commissioner, in the presence of a Notary and witnesses, is to issue to him an injunction to abstain completely from teaching or defending this doctrine and opinion or from discussing it; and further, if he should not acquiesce, he is to be imprisoned. (Favaro XIX, p. 321, trans. Finocchiaro, p. 146.)

None of this was to be divulged to the public by word or by action. At this point of the proceedings. the decision was an internal matter, leading to (1) Bellarmine’s private talk with Galileo, which happened on Friday February 26, and (2) the censure of certain books, which was promulgated by the Congregation of the Index on Saturday March 5. We shall argue that Bellarmine’s conversation with Galileo was confidential to a significant level, and the only public act was the censure of books.

Of course, this secrecy only meant that the Tuscan Ambassador Piero Guicciardini had some trouble finding out what was going on. He needed to inform the Grand Duke about his protégé Galileo. In fact, Cosimo II was not yet 26 years old (his birthday was May 12), and Galileo had been his much appreciated private tutor in 1605-1608. It was much easier to obtain information about the Consistory (a meeting of the Pope with all of the Cardinals) than to find a leak at the Holy Office. Guicciardini sent his report to Cosimo II on Friday March 4, which shows that he failed to obtain any information about Holy Office’s solemn session on Thursday February 25. He wrote that during Wednesday’s Consistory (February 24), young Cardinal Alessandro Orsini (at the tender age of 23, he was one of Cosimo’s “men in Rome”; they both grew up as young princes at the Florentine court; Orsini was also Galileo’s great personal admirer) intervened in Galileo’s favor, as the Ambassador remarks, “I do not know how considerately and prudently”.  Whereupon Paul V

summoned Bellarmine, and after discussing the matter, they concluded that Galileo’s opinion was erroneous and heretical; and then, the next day [Thursday], there was a Congregation [of Cardinals Inquisitors] on this matter to declare it [erroneous and heretical]; and Copernicus and other authors who had written on the topic were to be either emended and corrected, or prohibited; and I believe that the person of Galileo is not allowed to leave [Rome and return to Florence] until it is seen and heard, as is prudent, what the Holy Church wants and feels. (Favaro XII, p. 242).

Note that the Ambassador knows a lot, including two things absent from the minutes, viz., that heliocentric books are about to be censured, and that Galileo is not to leave Rome. By contrast, I believe it is quite significant that he does not know anything about Bellarmine’s conversation with Galileo on Friday February 26. This would indicate that the meeting was conducted as confidential Holy Office business (unless the Ambassador was incompetent, in which case the inference would be invalid). We shall return to this point tomorrow.

The Assessor and High Commissioner did not need to know about the censure of books or about Galileo’s travel restrictions. The great advantage of the system of Congregations (i.e., permanent committees) of  Cardinals is that there is very efficient overlap between them. It is very probable that the minutes, whose primary audience was the staff of the Holy Office, did not need to cover the decision to proceed with the censure of books because some Cardinals were members of both Congregations, viz., of the Holy Office and of the Index. Similarly, the travel-restriction order would not have been communicated to the Governor of Rome via Holy Office officials but rather by separate channels. If I were to venture a guess, I would say that Guicciardini had his information from these two offices (Index and Governatorato).

I have to apologize for breaking my yesterday’s promise: I promised I would cover Biblical exegesis today. I shall get to it at the earliest convenience.