This week 400 years ago at the Holy Office, the usual rhythm of work was perturbed by Monday’s Feast of the Chair of Saint Peter. What is more, a Consistory was held on Wednesday. The presence of all Cardinals was required at the Consistory, and so the usual Wednesday meeting of Cardinals Inquisitors was suspended that week.

Let us recall that the eleven experts who signed the finding on this day four centuries ago, had reached their verdict without much ado. In their opinion, it was obvious and incontestable.

Imagine being a high-ranking official whose job it is to prepare recommendations for the government jointly with other experts. First, it would entail some study, and some pondering of pros and cons. In simple cases, being the expert, you could probably reach an opinion in a matter of days. Of course, it would be rare that a simple case would reach your pay grade. A typical case would take you weeks or months to assess. The real challenge, however, would come in the second stage. Once you have reached your own considered opinion, you need to agree with the other members of the committee on a common statement. Each of you is a strong personality, with his or her own views,  It would typically take you days or weeks to agree on a formulation.  And in many cases you would just agree to disagree, producing two separate recommendations: the majority report and the minority report.

This imaginary scenario is not a good representation of the efficiency of the of consultores et qualificatores. They worked fast. In the case of the two heliocentric propositions, however, they were conspicuously fast. The propositions were submitted on Friday February 19. Unanimous consensus was reached on Tuesday February 23 (after a long weekend at that!) and the common recommendation was signed by all on Wednesday February 24. This was remarkable even for such a prompt panel. To have gone through so quickly and smoothly, the case must have been among the most clear-cut ones in the history of the Holy Office. The committee’s job was merely to state the obvious in the simplest terms. What was their mindset that they considered heliocentrism false to such an egregious degree?

The often-suggested reason is that they were incompetent, bigoted or both. I do not think this is an adequate account of what happened. I believe that few readers today are familiar with what the consultores et qualificatores actually meant. The central turns of phrase central to the qualifications (plus some additional keywords) require considerable background knowledge in order to be fully understood.

Let us start with the expression “absurd in philosophy”. When your imperious aunt disagrees with you she might say, “Don’t be absurd! We are not holding the MacDonald Clan gathering in New Guinea.”  The qualification of the Holy Office, however, is not a rhetorical figure: it is a very precise statement.

Between 1100 and 1800, philosophy was primarily a propaedeutic program of studies, which average students completed by age of 19. Brighter students easily by 15 or 16. To the teachers of Theology, Medicine and Law, Philosophy teachers were like today’s high-school teachers are to University professors. The former taught kids whereas the latter taught young adults and aspiring professionals.  In University of Salamanca’s Aula Magna there is a large painting (below) showing the faculty’s order of seniority. Teachers of philosophy are in the last row.  Philosophy was rarely cultivated as an autonomous, full-fledged academic discipline as it was in Antiquity and as it is now.

While it was not regarded as the pinnacle of academic pursuits, philosophy of the time was a force to be reckoned with. It was the basis of all knowledge and understanding. Every educated person had to have a good working knowledge of it. It was the only way everybody thought. I am not sure whether Aristotle himself would have approved of what scholasticism made of his philosophy but I am sure he would have been impressed how powerful a sway he held over an entire civilization for five or six centuries.

The Aristotelian/scholastic worldview was nice and neat: A place for everything and everything in its place. All everyday phenomena could be explained in terms of a few obvious, common-sense principles. It explained ordinary things, ultimately, in terms of their natures. Extraordinary things were extra-ordinary, and it would have been out of place to determine a natural explanation for them. Physics (derived from the Greek physis, “nature”) was about the well-ordered world (cosmos) of material things, the behavior of which was an expression of their natures.

We do not have a unified view of the world. This makes it very difficult for us to fathom the depth of fallacy perceived by the consultores et qualificatores in heliocentrism. If you are a physicist, imagine the visceral revulsion and/or morbid fascination you feel whenever you meet somebody who claims to have built a perpetual motion machine. This analogy is weak, however, because it only works for one branch of science at a time. Let me try to do better. Imagine you must give your opinion of the concave-hollow-Earth theory, which claims that we live on the inner surface of a hollow sphere with a very small Sun and even smaller, teeny tiny other stars performing a show for us in the sphere’s center (see drawing below). 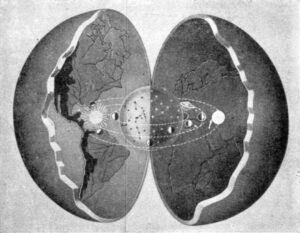 That ought to be a better analogy because the concave hollow Earth (by the way, there is also a convex-hollow-Earth theory) is wrong for a considerable number of reasons, contradicting several disciplines at once. Or take Deepak Chopra’s “quantum healing” theories where viruses emit sounds which lure DNA molecules to their destruction. That is also horribly wrong in physics, biology, chemistry, medicine, and probably a few other disciplines.

But even such pluridisciplinary fallacies fall short of the shear lunacy of heliocentrism seen through the prism of scholasticism. Scholasticism was a unified theory of everything – encompassing not just the material world but also the realm of ethics, politics, poetry, theology, music… even logic! The very foundations of reason itself were a part of the system. However ludicrous something like the concave hollow Earth may sound to us, our horror will inevitably fall short of that of a true scholastic faced with a similar statement. To the scholastic the fallacy does not just contradict individual disciplines but subverts the entire harmonious and unified worldview.

The consultores et qualificatores used the strongest word in their philosophical arsenal: absurd. The most classic of mathematical proofs is the reductio ad absurdum, where the absurd is an accretion of notions so obviously contradicting one another as to be instantly recognizable as a falsehood, e.g., 1 = 0.

Unfortunately, this is not the place to begin to explain exactly why is heliocentrism absurd in scholasticism. To do the topic justice an entire book would not suffice. For the convenience of the gentle reader, I shall limit myself to the briefest of references. Look up Book I of Aristotle’s De Caelo (“On the Heavens”). Part 2 explains that there are two “simple motions”, rectilinear and circular. Part 3 explains that the heavy body moves along a straight line to the center. Part 8 demonstrates that there can be only one heaven with a single center, and that the Earth is the “region about the center that has been given to the heavy body”. The logic is impeccable and self-contained. The reasoning in De Caelo is just a glimpse of the intricately and harmoniously woven tapestry which encompasses everything, supporting a sense of meaning, purpose, belonging and identity.

Tomorrow we shall have a brief look at heliocentrism and Biblical exegesis. To be continued.