On Tuesday February 23, 1616, the working session of the experts of the Holy Office reached unanimous agreement regarding two propositions encapsulating heliocentrism.

Four hundred years is one of the periods in the Gregorian Calendar after which the days of the months are guaranteed to fall on the same days of the week. And so it is that this year we can re-live the events of 1616 with special acuity. The Sacred Congregation for the Holy Inquisition of Heretical Error (Sacra Congregatio Sanctae Inquisitionis Haereticae Pravitatis: the official designation of this dicastery/tribunal by Sixtus V in Immensa Aeterni Dei of Feb. 11, 1588, instituting Roman Curia’s major reform) typically held two or three sessions a week. On Tuesdays and Wednesdays, there would be plenary sessions at Santa Maria sopra Minerva. Solemn plenary sessions, presided over by the Supreme Pontiff who was the Congregation’s head (there was no Cardinal Prefect), were held on Thursdays. In addition, the Inquisition’s officials would meet without the Cardinals at the Palace of the Holy Office in the Vatican (photograph) on Mondays, 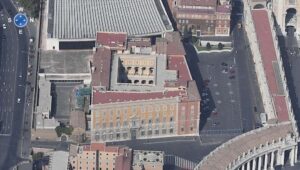 This week, now as 400 years ago, Monday was a major Roman feast, the Feast of the Chair of Saint Peter. As a consequence, the working session was moved from the usual Monday to the Tuesday.  Do not imagine a large group of scholars. The exact list of people who met on that Tuesday is unknown but it would have been a subset of those eleven who signed the findings on the following day.  These were the Commissarius Sancti Officii Father Michelangelo Segizzi (the High Commissioner, always a Dominican of the Lombard Province, the highest ranking official of the Congregation aside from the Cardinals), Father Giacinto Petroni, the Master of the Sacred Palace (always a Dominican theologian), the third Dominican who was consultor natus, viz., the Master of the Order of Preachers, was absent but Father Raphael Riphoz, Vicar-General of the Dominican Order was present, as well four other Dominicans, Jerome de Casalimaiori, Thomas de Lemos, Gregory Nunnio Coronel and Father Segizzi’s assistant James Tinto. The four remaining experts were Peter Lombard, Archbishop of Armagh, the Jesuit Father Benedict Giustiniani, the Theatine Father Raphael Rastelli, and the Benedictine Father Michael of Naples. Eleven men altogether.

The two propositions to be qualified by the consultores et qualificatores (the latter held their position for life, former either ex officio or ad hoc) were submitted to the Holy Office only on the preceding Friday, February 19, 1616. The matter was not new, however. In fact, as Fantoli notes (p. 445), the formulation of the propositions “is taken more or less word for word” from the Dominican Father Tommaso Caccini.

The latter gave a sermon on the fourth Sunday of Advent, December 21, 1614, in the Church of Santa Maria Novella in Florence. His topic was Joshua 10 where, as he later said in his deposition, “the sacred writer relates the great miracle which God made… by stopping the Sun”. He opened his sermon with the words, Viri Galilaei, quid statis adspicientes in coelum? (“Men of Galilee, why are you looking in the sky?” cf. Acts 1:11), which everybody in Florence understood as an allusion to Galileisti, the followers of Galileo. He went on to say that mathematics was a diabolic art, and that mathematicians ought to be driven out of Christendom. Do not judge the pious Black Friar too harshly. At the time, the word “mathematics” was practically synonymous with astrology. His sermon, however, was provoked by Galileo’s assertion that the Earth is spinning on its axis and orbiting the Sun. Heliocentrism continued to trouble Caccini’s conscience to the point that three months later, on March 20, 1615, he made a deposition to the Inquisition in Rome, in the presence of the High Commissioner Segizzi.

An investigation of Galileo’s Copernicanism was under way. As always, the proceedings were conducted in secrecy. Galileo was never questioned. The Inquisition had some texts examined and obtained several depositions. No drama. No racks were involved. One of the Inquisition’s perennial priorities was calming things down. Galileo, in the meantime, fearing that Copernicanism might be rejected by ecclesial authorities, stepped up his campaign in its favor. This only caused more turmoil, and ultimately, made things worse.

After about a year’s work, the Holy Office was satisfied that Galileo personally was an honest Catholic. The only remaining point was Copernicanism itself, and more specifically, the two propositions submitted to Inquisition’s experts on Friday February 19, 1616:

I. The Sun is the center of the world and hence immovable, devoid of local motions.

II. The Earth is not the center of the world, nor immovable, but moves as a whole, as well as with a diurnal motion.

Ad I. All said that this proposition is foolish and absurd in philosophy, and formally heretical since it explicitly contradicts in many places the sense of the Holy Scripture, according to the literal meaning of the words and according to the common interpretation and understanding of the Holy Fathers and the doctors of theology.

Ad II. All said that this proposition receives the same censure [qualification] in philosophy and that in regard to theological truth it is at least erroneous in faith. (Trans. by Finocchiaro, p. 146.)

What did they mean by “absurd in philosophy”, and “formally heretical”? How did they come to such conclusions? Could Galileo have prevented this from happening? What happened in the following days? And what was the big picture? Was it a disaster or a hidden blessing? Find all this and more in future installments of this series.

To be continued tomorrow.