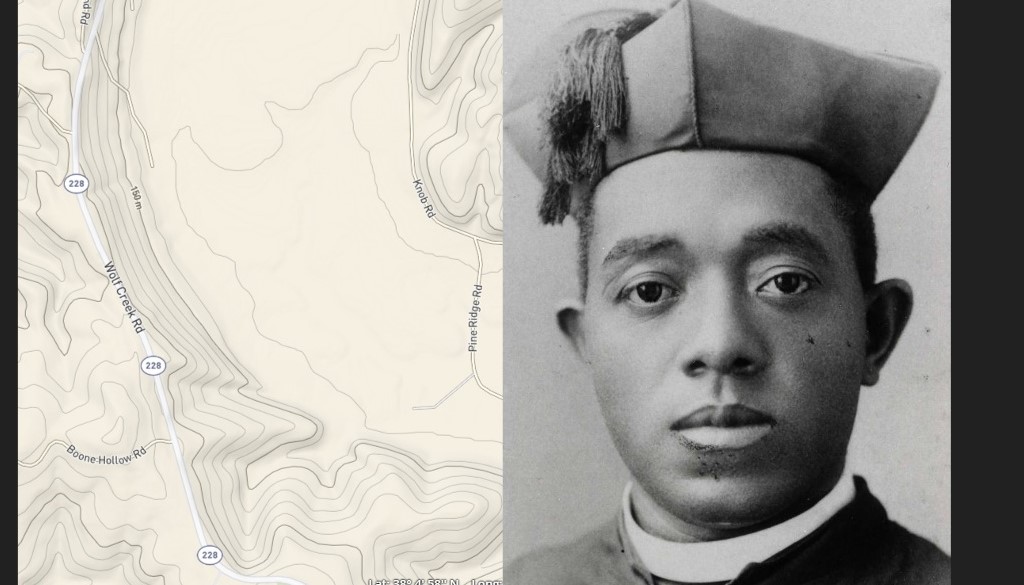 What carved out the St. Theresa Bowl?

You are driving on a small 1.5-lane road in western Meade County, Kentucky, in the Ohio River Valley.  The road keeps bending to the left.  It hugs an isolated hill that rises steeply up on the left.  On your right lies a flat plain, a half mile wide or more, that is following the road, curving to the left.  Beyond the plain is what looks like a rim of hilltops, also curving to the left.  But you know that beyond that “rim” the high, rugged ground continues, because when you drove here from St. Theresa of Avila Church, you drove down from those heights.

You are in the middle of what seems to be a giant bowl carved into hills. The image above (click it to enlarge) is a 360-degree panorama from within the “St. Theresa Bowl”*.  The telephone pole at center (red arrow) casts the shadow seen on the road to the left and right (green arrow).  The hill is the tree-covered section that occupies the left-hand portion of the picture; the plain and rim is seen in the rest.

This bowl measures roughly three miles in diameter.  It has a large central uplift (that hill on your left).  You know there are two suspected meteor impact sites in Kentucky—one near Shelbyville and another in Middlesboro.  The unusual geology of this Bowl is more striking than either of those.  Is this yet another Kentucky impact crater?

Welcome to a land of remarkable history and geology.  Few people know about this land.  But thanks to the possible canonization of America’s first African-American priest, Fr. Augustine (also Augustus) Tolton, whose maternal grandmother is buried in the cemetery at St. Theresa, people may come to know about it a little more.

St. Theresa is an old parish by Kentucky standards.*  Catholic settlers began arriving in the area just south of the Bowl in the late 1700s.  By 1805 the settlers were receiving visits from travelling missionaries, and by 1818 they had built a log church near the eastern bank of the Ohio River, at a place called Flint Island.  A decade later they built another log church, up on the hills east of the river in an area that is now part of the church’s cemetery.  The community received their first resident pastor, Fr. Charles Ignatius Coomes, at about the same time as the second church was completed, in 1830.  The current brick church dates to 1856.

This church community was a mixed group, consisting of people of European descent, and people of African descent—the latter held in slavery by the former.  Among the enslaved were Matilda Hurd, her husband Guston (Augustus) Chisley, and their six children: Charles (named for Fr. Coomes, who baptized him), Anne, Sicilia, Sicilia Ellen, and Martha Jane.

Martha Jane, the eldest, would become the mother of Fr. Tolton.  She and her siblings were baptized at St. Theresa—the records are still at the church.  Matilda was probably baptized also, since she was buried in the church cemetery, just some yards from where the second church was standing.

Matilda’s tombstone is still there.  Fr. Ron Knott, a retired priest of the Archdiocese of Louisville (Kentucky)—who grew up in the area, went to school at St. Theresa, and is working on a parish history project—found the baptismal records and learned about the tombstone, and brought all this to the attention of others, resulting in a story in the archdiocesan newspaper, The Record.

Having seen the Record story, it was easy for my wife and I to find Matilda Hurd’s tombstone.  It reads:

Martha Jane would eventually be taken from St. Theresa to Missouri by those who held her in slavery.  There she would marry Peter Paul Tolton at St. Peter’s Catholic Church in Brush Creek, and give birth to Augustine Tolton.  Peter Paul would escape slavery during the U.S. Civil War to join the Union army, never to be seen again.  Martha would later escape with Augustine and her two other children, rowing across the Mississippi River from Missouri to Illinois while being shot at by Confederate soldiers.

Pope Francis in 2019 authorized the promulgation of a decree regarding the cause for canonization of Fr. Tolton, recognizing “the heroic virtues of the Servant of God Augustine Tolton”.  Tolton may end up being the United States’s first African-American saint.  If so, there will probably be increased scholarly interest in St. Theresa of Avila Church, the home of his mother and her parents.

There will be much for scholars to learn.  The sources I have consulted for information about Matilda and Martha Jane often disagree with each other in significant ways.  Certainly some things will turn out to be different from what is currently thought, or from what a person might ascertain at first glance.

After all, this story involves slavery, and all that is implied by slavery.  Moreover, despite all this African-American history in the region of the Bowl, with perhaps two hundred people held in slavery by families at St. Theresa over time, there is not an African-American presence in the church now.  Yet this story also involves baptisms, and families, and parents naming their first-born son for the priest who baptized him, and a slave buried a few yards from the parish church (and also just a few yards from the couple who legally owned her).  Out of St. Theresa grew a family whose faith roots ran so deep that, despite everything, they would bring forth as fruit the first African-American priest.  So there is more to be learned, and things will certainly turn out to be different from how they might first meet the eye, probably for both better and worse at the same time.

The St. Theresa Bowl turns out to be different from what first meets the eye, too.  The Bowl is not a crater.  It is the former path of the Ohio River.

From West Port, Kentucky to Troy, Indiana the Ohio passes through rugged hills that at different locations send it bending this way and that.  Here the Ohio River valley holds its own with some of the world’s most spectacular places, with high bluffs overlooking the sweeping bends and bottomlands of one of the world’s mightiest rivers.  Just upriver from the St. Theresa Bowl is the Big Bend at Leavenworth, Indiana, where the river doubles back on itself.  From the high ridge that runs down the center of this hairpin bend you can see the river flowing one way on your right, and the other way on your left.  If you drive the small 1.5-lane road that encompasses the inner bank of the bend, you find that the road keeps bending to the left, hugging a hill that rises steeply up on the left.  On your right lies a flat plain, well more than a half mile wide, that is following the road, curving to the left—within which flows the river.  Beyond the plain and river is what looks like a rim of hilltops, also curving to the left.

The St. Theresa Bowl is clearly a place where there once was a bend in the Ohio River just like the Leavenworth bend—but where the river ate through the ridge in the neck of the bend and broke through, vacating over time the Bowl, and leaving behind something that, at first sight, might be mistaken for a meteor crater, just a few miles from St. Theresa Church.  It might be a place more rare than a meteor crater—the size of the Ohio alone suggests that; there are not a lot of big rivers with vacated bends like this.

There are rare stories of church history and of geology in the land of St. Theresa of Avila Church.

“St. Theresa Bowl” is my name for this feature.  I have not found any official name for it.  If there is any naming or discussion of the Bowl at all, it must be confined to pretty specialized literature.

Sources I have used for historical information in this post:

6  |  Lunar Astro-photography on the Cheap