The International Astronomical Union (IAU) executive committee visited the Vatican Observatory (Specola Vaticana) on May 15th, 2019. The 23-member group included the executive committee members (13), division presidents (8) and two general secretariat staff. They held three working sessions on the premises of the Specola, followed by the tour of the permament exhibition in the telescope domes of Villa Barberini. The visit concluded with a dinner where they and their spouses were greeted by members of the Jesuit community. 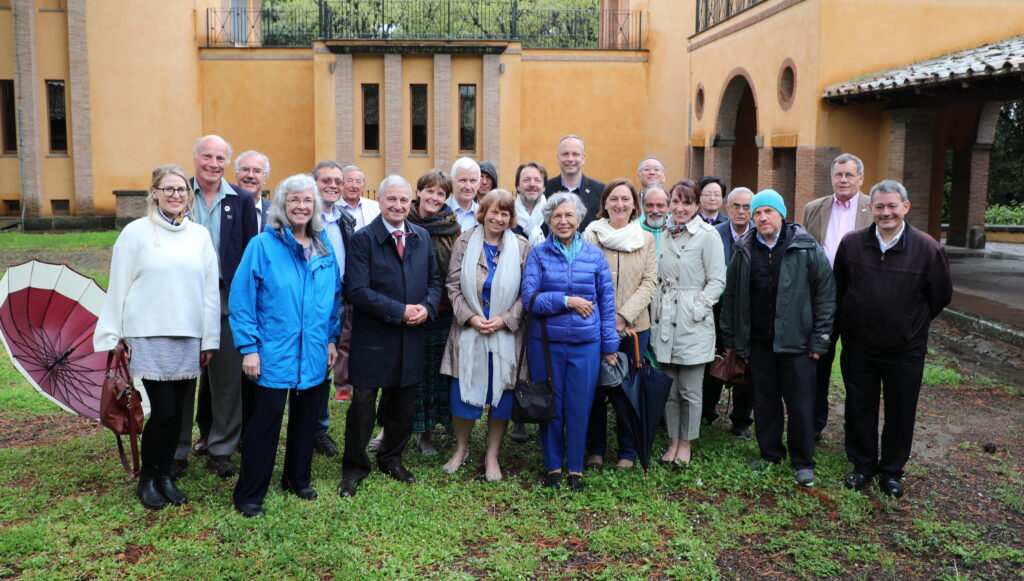 IAU Executive Committee, accompanied by a few Jesuits from the Vatican Observatory, visiting our telescope domes in the Pontifical Villas. (Photo by Peter Lah SJ)

On Monday, May 13, the IAU executive committee met at the Accademia dei Lincei in Rome. Fr. Paul Mueller, the vice director of the Specola, gave a talk on the history of Vatican Observatory’s relationship with the Union. The Accademia dei Lincei is the place of the first IAU General Assembly in 1922, during which meeting the participants also visited the Vatican Observatory in its location in Vatican City.
The Eighth IAU General Assembly also met in Rome, in September of 1952. At that occasion they were received by Pope Pius XII at the summer residence in Castel Gandolfo. This visit was accompanied by another visit to the Observatory, which had moved to that location in 1935.
The International Astronomical Union was founded in 1919. It traces its roots back to the first multi-national project in astronomy, called the “Carte du Ciel” project that produced a complete photografic map of the sky. During their latest visit, the IAU visitors were excited to see the original telescope that was recently restored.
The Vatican Observatory was a partner to the Carte du Ciel project. Its astronomers – Jesuit fathers, religious sisters and lay staff – dedicated decades’ worth of research to it. The original photographic plates are currently being digitalized and analyzed by its staff astronomer don Alessandro Omizzolo.