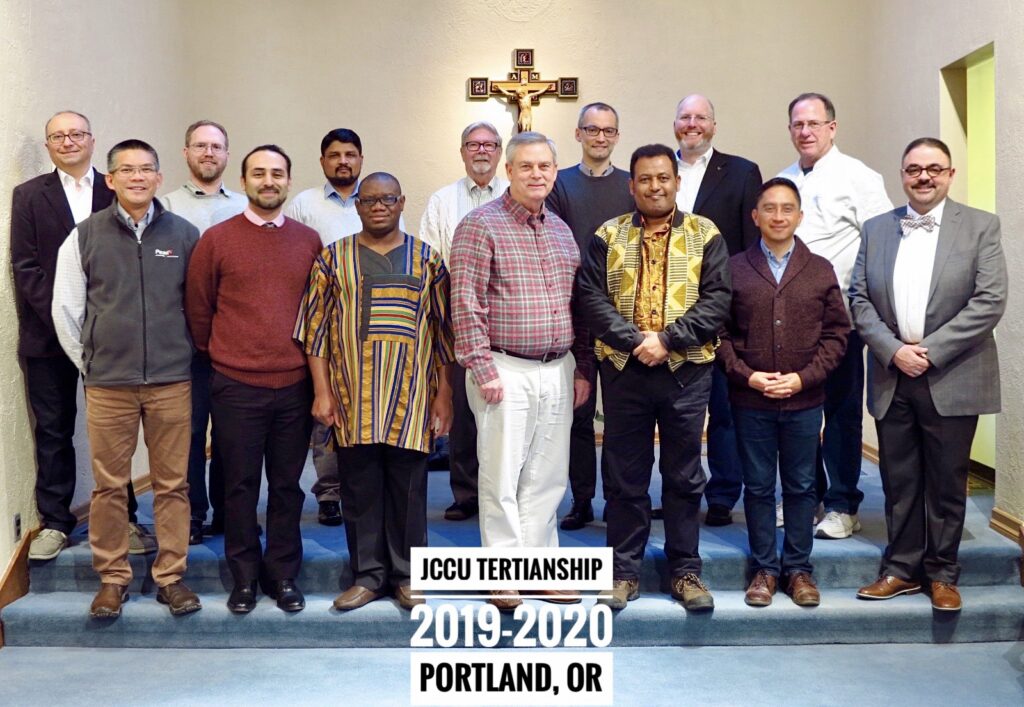 Before I start this entry, I should reassure any concerned readers out there: everybody at the Vatican Observatory is in good health.

Quarantine Log, Day 7: The same walls. I have eaten half a colomba by myself. The Fanta supply is running low (but miraculously new cans appear). Thankfully there’s still about 100 coffee packets. That should last a couple more days. Toilet paper supply is sufficient. Is there anybody out there?

This past year, I was away from the Specola Vaticana, doing the last stage of Jesuit formation called “Tertianship.” I spent several months with ten other Jesuit Tertians from around the world, each quite accomplished in their own areas of work.  The program revisits many of the things Jesuits do at the very beginning of formation in the novitiate. We repeated the 30-day silent retreat known as the Spiritual Exercises. We studied the Jesuit Constitutions and General Congregations. (This time, after 18 years in the Company, the documents carried a lot more meaning.) We shared our lives and stories.

The program culminates in an Experiment, which generally means some time spent in a Jesuit work that (usually) differs in tone or context from the work that one has done in the past. In my case, since I have done very little work in a high school setting and was interested in learning about the issues, priorities, and concerns of today’s youth, I thought that would be a good area to explore.

So, I was assigned to San Jose, California, where I would be working with Bellarmine College Preparatory School as well as Cristo Rey San Jose (two Jesuit schools that operate on very different models).  It was supposed to be a ten-week experience, from the first of February until after Easter, after which I would return to Portland, Oregon (where Tertianship is based) for some sharing and a short retreat to finish off the program.

Then the coronavirus came to California.

Santa Clara county was an early epicenter of the outbreak in the state. On March 11, I was assisting with a Kairos retreat when Bellarmine Prep decided to close the school, shifting to online learning.  (This was several days before the county schools made the same decision.) What struck me most was the reaction of the students.  I would have imagined them ecstatic at the idea of sleeping in, attending class in their pjs, etc.  Instead, their first reaction was, “What about sports? / What about the school play? / What about robotics club?” (The BCP robotics club is nationally ranked and was preparing to go to a major competition.) “What about prom?”

In that moment I realized just how much their lives were intertwined with the activity of the school. At any given moment (even on weekends) the campus quad would be crawling with students, and now suddenly that stopped.  Online learning can make up for some of the intellectual content, but it does not support community in the same way.

And what about me?  It was not long before the Tertian masters decided to formally end the year’s program rather than having us risk further unnecessary travel back to Portland.  I had nowhere to go.  Given the state of the outbreak in Italy at the time, returning there was not an option. The Specola community in Tucson was understandably reluctant to have me travel there, since there are several men who might be at higher risk should I somehow communicate the virus to them.  So, I extended my stay in San Jose.  Thankfully, the Jesuit community there was quite understanding and made me feel at home for the duration.

Most of my fellow Tertians also had difficulty returning home, whether in the US or abroad, and were at least temporarily stuck in their experiment locations.  A few are still there.  One has been having trouble booking a flight back to his native Sri Lanka, and two Americans are still stuck in San Francisco and Los Angeles, respectively. 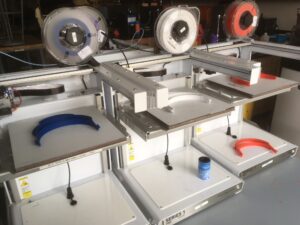 PPE production on 3D printers in the BCP Maker Lab

My time was not spent idly.  The director of the BCP Maker Lab, David Dutton, organized a project to produce personal protective equipment (PPE)–which was in short supply–for medical personnel and other workers who needed such equipment.  The participants include BCP students, alumni, parents, and others who are in some way associated with the school or its people. (This includes two MIT students who returned to California after the ‘Tute closed its campus.)  A fellow Jesuit (Joe Dickan) and I had access to the Maker Lab since we lived on campus, so we used its 3d printers to produce parts for face shields.  Joe and I produced probably about 200 head supports and countless small parts that provide structure to the bottom of the face shield.

I also spoke to online classes about the Vatican Observatory, faith and science, and my own research. I spent two full days on Teams speaking to every freshman physics class at Bellarmine Prep.  [If any educators are reading this and if you want me to speak to your classes, please let me know. I am happy to do it.]

Oh, and I cannot forget the science.  Even though I haven’t been able to do any research since the start of Tertianship, there are several papers in various stages of completion that I have been picking away at.

Eventually, the situation in Italy calmed down a bit. (In fact, the current situation is far better than the US in terms of per-capita cases and spread rates.)  So, my superior and the vice-director of the Observatory, Paul Mueller, advised me to return to our headquarters in Italy.  After an epic 24 hours in transit on three different flights, I landed in Rome one week ago. 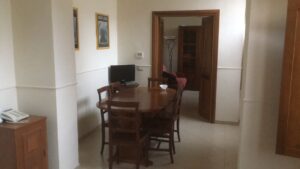 Italy mandates a two-week quarantine period for anyone arriving from out of the country. Fortunately, there is a perfect facility right here in the Specola headquarters.  We have a guest apartment that is normally reserved for visiting scientists, but has sat unoccupied since the beginning of the pandemic.  It boasts two bedrooms, each with its own bathroom; a sitting room; a dining room; and a small kitchen.  It also opens onto a small secluded garden that provides an opportunity to see the Sun and to get outside.  This has been my home for the past week.

How have I been keeping occupied during this period of isolation?  For one, I have been working on some new entries for the Specola Guestbook column for this blog. Keep an eye out for some interesting characters in the next few weeks, including a person who developed a theory of blackbody radiation several years before Planck or Wien, but never got recognition; and have you ever wondered who Gale Crater on Mars is named after?

I am still involved in the BCP PPE project, albeit remotely.  The project has shifted its focus from production to developing designs and support for people who need PPE or want to improve comfort and functionality of existing PPE.  I am still able to contribute ideas and feedback from afar.

I have also spent some time constructing little metal models, from the Metal Earth series. 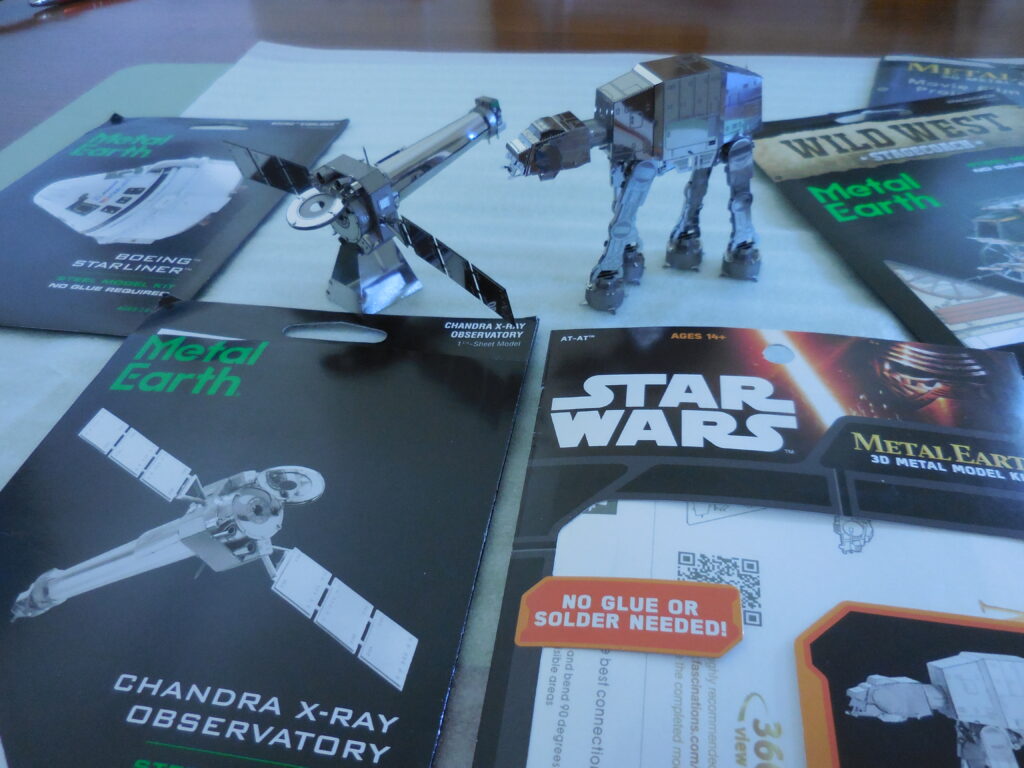 Oh, and there is one other thing that helps pass the time.  Nobody else uses either my office or the meteorite lab, so after normal work hours (when the staff have gone home and the corridors are empty) I can access those facilities. This gives me access to my own tiny maker space and 3d printer, as well as the possibility of working with the meteorite collection (though there isn’t much to do with it right now).

Normally, the office door is decorated with an image from The Lord of the Rings depicting the entrance to the mines of Moria, with the inscription (in Elvish) saying “Speak [say] ‘friend’ and enter.”  Well, we can’t be having people entering into a quarantine zone!  So, I changed the decoration accordingly. 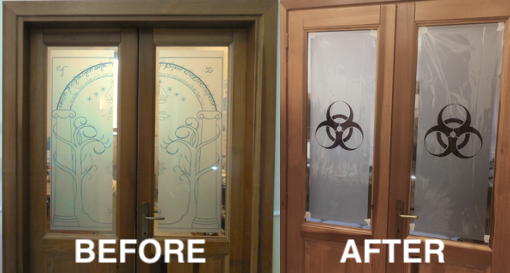 Just one more week of quarantine.