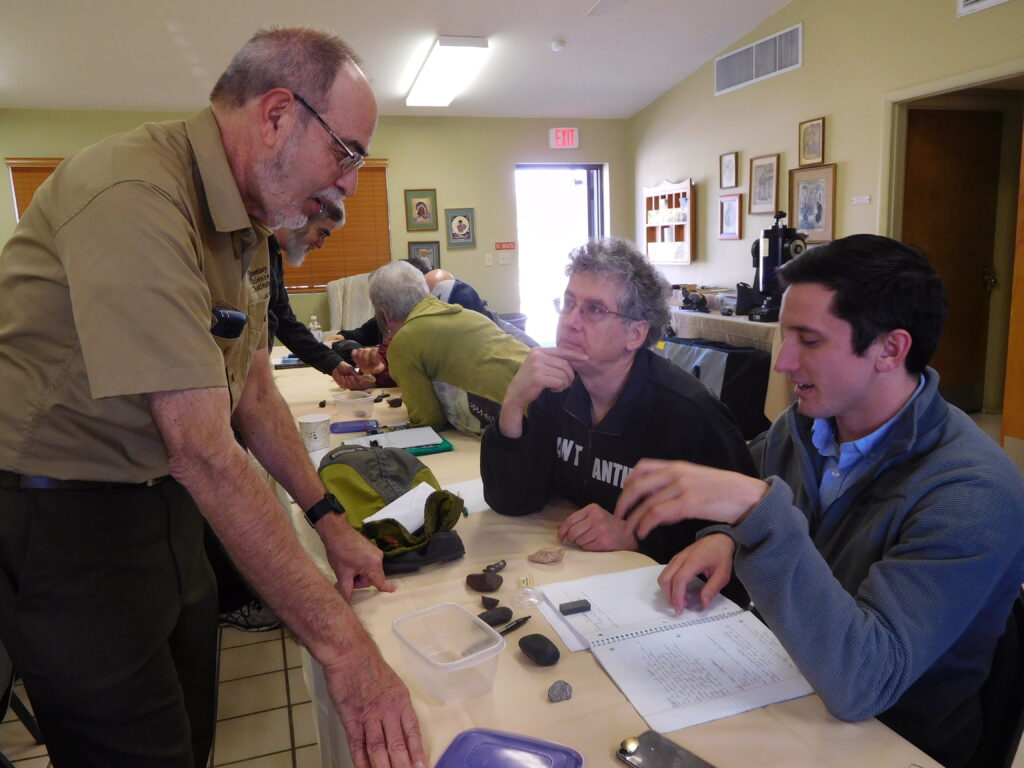 Those of us engaged in Education and Public Outreach (EPO) find out very quickly that not everyone processes or responds to information in the same way. Especially important to presenters is the realization that audience or workshop members do not necessarily share our “individual competences,” and because of this disparity, our well-prepared lessons and our expectations for student responses may not be compatible with all learners. In 1993, Professor Howard Gardner published Multiple Intelligences, The Theory in Practice. Gardner was a member, later Co-Director, of  Harvard University’s Project Zero and an Adjunct Professor of Neurology (Boston University School of Medicine). Gardner’s specialty was human cognition, and 25 years later his theory of Multiple Intelligences (MI) is said to have “revolutionized how we understand intelligence” (edutopia.com, George Lucas Educational Foundation).

Gardner’s original theory posited seven types of MI, with an eighth added later. Each “intelligence” gives insight into how learners process information. Which MI best describes your style, your comfort zone, in a learning situation? 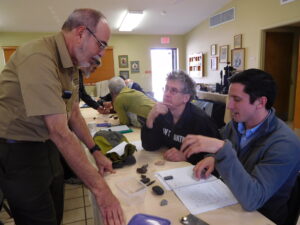 Of the teachers, the students, and the college peer tutor, which one/ones exhibited interpersonal intelligence characteristics and which exhibited intrapersonal characteristics? Which category describes you as a learner, and how do you, as a presenter, reach both audiences? 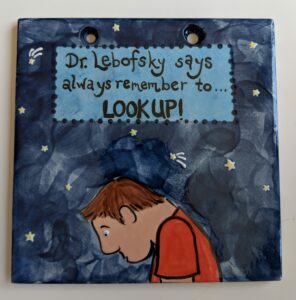 A gift from a Visual-spatial student preceptor to her Logical-mathematical professor. Photo by Nancy Lebofsky.

Which MI Describes You as a Learner? How Do You Express Your “Intelligence”?

Where do you, your friends, family, and colleagues fit into the MI model? Think about the games people enjoy on their electronic devices. Are you best at strategy games? Math-based games? Manipulating shapes? Decoding?

What bores or frustrates you? Do you shudder at Sudoku? Dread diagramless crosswords? Lose your crops to the zombies? Can you see the “ghost of language” in cryptograms?

Meteorite Trivia: When Oscar Monnig began acquiring specimens in the 1930s that eventually became the Monnig Meteorite Collection (Texas Christian University), he advertised his willingness to buy meteorites, and used field agents (employees from the family department store) to seek out and evaluate what people thought might be the genuine article. The field agents communicated their results to Monnig via coded text on post cards.

Being Open to Other Points of View 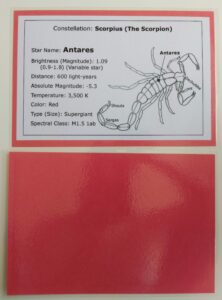 Years ago we devised an activity for use in teacher in-service workshops. This activity consisted of Constellation Cards, each featuring a star and an illustration of its location within its constellation. The set for younger students gave the brightness, distance from the Sun, temperature, and color of the star; a second set for older students gave more detailed information such as absolute magnitude, type, and spectral class. Each Constellation Card was placed on a rectangle of construction paper representing the color of the star, then laminated.

Our original plan for presenting the activity was to give each participant a star card and ask them to find their “family” (constellation). Next, we told the families that it was time for the members to venture out into the world. We then asked the “stars” to group themselves according to brightness (0.1 to 1.1; 1.1 to 1.7; etc.) and to notice where the rest of their family members were. We then asked the stars to regroup according to temperature (3000 to 4000°C; 4000 to 5000°C, etc.). Stars were again asked to observe where their family members were. Finally, we asked the those within the lowest temperature group to begin to form a line, lowest temperature first. The other groups were asked to join in, keeping in order from lowest to highest temperature, until a U-shaped “line” was formed. At this point, the group was instructed to flip over their cards to reveal the colored paper. Because of the shape of the “line,” everyone could observe the color progression from cool red stars to hot blue stars.

During one of these presentations, a fifth grade teacher and Little League coach, asked if he could try a different approach. Instead of participants moving from one small amorphous group to another, he directed us to line up in constellation groups across one wall of the lab, a pace or so from the wall. Those with the brightest stars (less than 0) were instructed to take one giant step backwards; those with brightness from 0.1 to 1.1 remained on the baseline; 1 to 1.7 took one giant step forward; 1.7 to 2.0 took two giant steps forward; 2.05 to 2.9 took three giant steps forward; those with stars fainter than 3.0 took four giant steps forward.

Next, participants were instructed to consult the temperature category on their cards. Those with temperatures from 3000 to 4000°C (red stars) sat on the floor; from 4000 to 5000°C (orange, orange-yellow) kneeled on the floor; 5000 to 7000°C (yellow, yellow-white) sat on chairs; 7000 to 31,000°C (white, blue-white, blue) remained standing. This spontaneous new way to do the activity came from a teacher with bodily-kinesthetic intelligence, and we still use his model over 20 years later in Astronomy Camps for Girl Scout Leaders.