On Wednesday, December 3, I gave a talk at the Newman Center in Tucson. The Center is just across the intersection from Steward Observatory where we have our offices on University of Arizona’s campus. Over the 33 years of Vatican Observatory’s institutional presence in Tucson, its Jesuit personnel have had good or outstanding collaboration with the Dominicans who are in charge of the Newman Center. Fr Bill Stoeger animated the St Albert the Great Forum for many years, a well-established group which has acquired a circle of regular participants. This is in many ways an excellent feature but it also represents a major disadvantage: the regulars are quite articulate and when a young student appears he or she tends to remain silent, and only rarely will he or she become a regular.

Fr Jacek Buda, O.P., suggested that we might try something new. I agreed to give a somewhat meditative talk on September 17, based on astronomical images conveying the vastness and grandeur of the Universe. (I have explored these topics two of my posts: The Deepest Picture and Terrifying Silence or Wondrous Generosity?) In my September Newman Center talk, I encouraged the audience to get in touch with the feelings elicited by the images, and I shared some of mine. The talk was a moderate success in that it was attended by perhaps 30 people, including a reasonable proportion of students.

On October 8, Fr Paul Mueller from the Vatican Observatory gave a talk based on his new book, “Would you Baptize an Extraterrestrial?” It was very thoughtful and much appreciated by those who came. 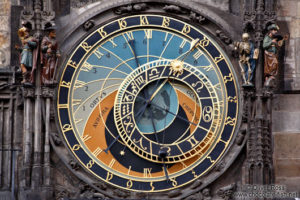 The latest talk, on December 3, was once more given by me. With the coming end of the year, my topic was The Rebirth of Time. Timekeeping schemes are not just practical tools or conventions. They have substrata of symbolic relevance to the society with its need for a constant rhythm of feasts and fasts, of the ordinary and extraordinary. It is no coincidence that the Vatican Observatory’s origins have to do with the Gregorian reform of the calendar in 1582. The New Year is not just a convention. Where does the power of such customs come from?
My interest in this topic has to do with the workshops I attended in 2011 and 2013. There is a proposal to decouple timekeeping from Earth’s rotation. Leading experts are not in favor, for a number of reasons. They organized these meetings to work on the dossier, and I was fortunate to be invited.

The Newman Center talks will continue, hopefully with an informal evening with Brother Guy. We are considering a Wednesday within a few weeks after January 26 when he is speaking at the Centennial Hall as the first speaker in the annual UA Science Lecture Series.