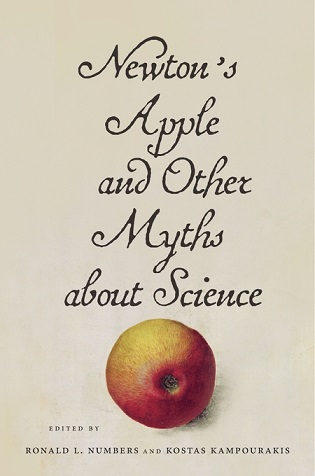 This 2015 book, published by Harvard University Press (HUP) and edited in part by Ronald Numbers, is a follow-up to the 2009 book Galileo Goes to Jail and Other Myths about Science and Religion which was also published by HUP and edited by Numbers. From HUP:

A falling apple inspired Isaac Newton’s insight into the law of gravity—or so the story goes. Is it true? Perhaps not. But the more intriguing question is why such stories endure as explanations of how science happens. Newton’s Apple and Other Myths about Science brushes away popular misconceptions to provide a clearer picture of great scientific breakthroughs from ancient times to the present. Among the myths refuted in this volume is the idea that no science was done in the Dark Ages, that alchemy and astrology were purely superstitious pursuits, that fear of public reaction alone led Darwin to delay publishing his theory of evolution, and that Gregor Mendel was far ahead of his time as a pioneer of genetics. Several twentieth-century myths about particle physics, Einstein’s theory of relativity, and more are discredited here as well. In addition, a number of broad generalizations about science go under the microscope of history: the notion that religion impeded science, that scientists typically adhere to a codified “scientific method,” and that a bright line can be drawn between legitimate science and pseudoscience. Edited by Ronald Numbers and Kostas Kampourakis, Newton’s Apple and Other Myths about Science debunks the widespread belief that science advances when individual geniuses experience “Eureka!” moments and suddenly comprehend what those around them could never imagine. Science has always been a cooperative enterprise of dedicated, fallible human beings, for whom context, collaboration, and sheer good luck are the essential elements of discovery.