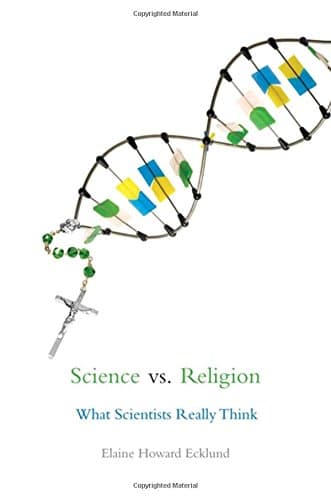 An excerpt from the 2010 book Science vs. Religion: What Scientists Really Think, written by Elaine Howard Ecklund (Director of the Program on Religion and Public Life for the Rice University Institute for Urban Research, and Rice Scholar of the James Baker III Institute on Public Policy), and published by Oxford University Press. Ecklund writes:

In the classroom, scientists who do not hold a personal faith still have a responsibility to interact respectfully with religious students and not require them to hide their worldviews on philosophical, moral, or aesthetic issues. But many scientists adopt a dismissive or pejorative stance toward religious students, even suppressing discussion of religion altogether. Recall Raymond, a physicist we met earlier, who said that the views of religious students should not be considered because “they’re in the big time now”. Bear in mind also the implications of those sentiments expressed by the social scientist who tells her students to put aside their religious beliefs if they want to succeed in her class. She seems to assume that studying religion from a scientific worldview is necessarily at odds with having personal faith—as if faith somehow dilutes or softens the brain—so much so that one’s religion must be put aside in order to engage in analytic and systematic science. If she wants her students to abandon religion in favor of science, her approach is counterproductive. Her nonreligious students will simply be encouraged to buy into the myth of science-religion conflict, and her religious students might abandon certain important scientific tenets (such as evolution) in an effort to maintain their faith.

These negative ways of approaching religion in university classrooms often stem from lack of understanding of the diversity of religion. As pointed out in Chapter 2, a substantial portion of scientists have little present positive exposure to religion. We may even go so far as to call some religiously illiterate. One step toward religious literacy would be to find out more about the various faith traditions of their students. The levels of religious commitment among their students most often will mirror those of the general public, since religious and nonreligious persons now generally seek higher education at the same rate. I am not saying that scientists need to advance religion or religious causes they disagree with. Rather, they should be open to learning about the perspectives from which their students come. Other approaches to religious literacy might include exploring the ways in which various religions relate to science, or the role that religion has played historically in the academy. And still another way to broaden religious literacy would be to make efforts toward dialogue between secular and religious scientists.

Click here for a preview of this book, courtesy of Google Books.

NASA’s Pi in the Sky Challenge

The Bookfoxes Interview (Part I)