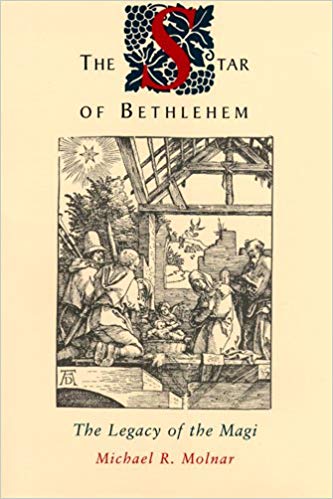 The Star of Bethlehem: The Legacy of the Magi is a somewhat technical book written by Michael R. Molnar and published in 1999 by Rutgers University Press.  It is technical in that the thrust of the book is that the Star of Bethlehem was the planet Jupiter in a position in the sky that was of importance to the astrologers, that is the “magi”, of the time.  Readers will not find discussions of some spectacular blaze of light such as hangs over many a Nativity set.  Readers will find an argument for why Jupiter fits everything that is described in the second chapter of the Book of Matthew.

From the publisher, Rutgers University Press:

Could the $50 purchase of an ancient coin by a Rutgers astronomer have unlocked the mystery of the Christmas Star? For years, scientists have looked, with little success, to astronomical records for an explanation of the magical star that guided the Magi to Christ’s manger. Intrigued by the image he found on the latest addition to his coin collection, Michael Molnar thought there might be more to learn by looking, instead, at the teachings of ancient astrologers.

Molnar argues in his book that the Star of Bethlehem was not a star at all, but rather a regal portent centering around the planet Jupiter that was eclipsed by the moon. He bases this theory on the actual beliefs of astrologers, such as the Magi, who lived around the time of Christ. Molnar found some intriguing clues to the mystery while researching the meaning of astrological symbols he found an ancient coin, which bore the image of Aries looking back at a star. He found that Aries was a symbol of Judea at the time, and that ancient astrologers believed that a new king would be born when the moon passed in front of Jupiter. Molnar wondered, could the coin have been issued as a response to the Great Messianic Portent, the Star of Bethlehem?

To match the story of the appearance of the Christmas star, Molnar also knew the event had to happen when Jupiter was “in the east.” Using these criteria and a computer program, he was able to chart an eclipse of Jupiter in Aries on April 17, 6 B.C., a day when Jupiter was precisely “in the east,” which confirmed his theory. Moreover, he found that a Roman astrologer described the conditions of that day as fitting the birth of a “divine and immortal” person.

According to Harvard University Professor Owen Gingerich, “this is the most original and important contribution of the entire 20th century” about the Magi’s star. Using clues from astronomy, astrology, and history, Molnar has created a provocative, fascinating theory on the Christmas Star. He weaves together an intriguing scientific detective story which resolves one of the world’s greatest mysteries: The Star of Bethlehem at the birth of Christ.

Appealing to the Infinite: Philips Lansbergen and the Battling Star-Armies of God

Illuminating North America! (or, Anna and Fernando Find a Star)

The Sun’s Many Strange Neighbors (re-run)

The Sun’s Many Strange Neighbors