While I’m waiting for some research to come in for my second “through clear glass” entry, I thought I’d share some research on an object I found.

I was called by a flea market seller to come over and look at some photographic equipment he had. I grabbed the magic lantern right away, and a couple turn of the century items that were interesting. Before we settled on a price, he pointed to a collection of black lacquered, obviously homemade wood boxes. The one that piqued my interest the most was about 5” square, boomerang shaped and 18” long. It stands on a nice iron stand, with one end occupied by a ground glass screen. There are two small cranks along the inside edge of the curve, and on the far end are two razor blades held on with screws. My friend saw my eyes light up, and I saw the dollar signs in his. I held it up and said “I promise you I am the only one who will want this” After explaining to him what a spectrometer is, and how I knew right away what was before me. We came to a good price for the lot, and I went home; still not knowing exactly what I just bought. 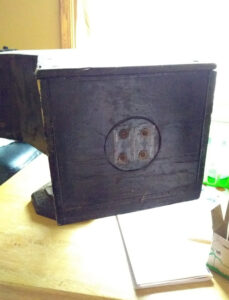 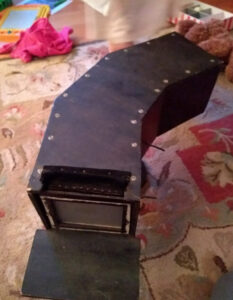 After cleaning, the shape was instantly recognizable to me.

Once home I grabbed cleaning supplies and a   screwdriver. I pulled the lid off, and found a black painted canvas cover underneath. This was removed by peeling it off carefully. Now that the inside was exposed I could see what I had. The construction is top notch home handyman. By this I mean the builder had access to basic power tools, but wasn’t a cabinet maker (I would be ecstatic if all my projects turned out this well). Everything is square, and made to a high standard, but is somewhat roughly finished. The body is plywood, with the bottom being heavy  and thinner ¼ inch sides and top. Slotted wood screws are used throughout. Almost all the metalwork, save the cast iron base, is Gilbert Erector set. The finish is black paint, thickly applied with a brush..

Inside, after the slit is a lens for collimating the light, then a prism on a geared platform connected to one of the small cranks, followed by a second lens in a light baffle. Then is the ground glass, which is held in a frame. This frame is mounted via coil springs to a mount that moves to and fro to focus the light on the glass. The homemade nature is evident in the mechanics, and is quite clever. The gearing for the prism and the pinion gear for the focus is Erector Set. Looking at collector sites, I dated them to the 1930s. The rack for the focus is a length of ½” threaded rod, glued onto a slot carved into the base of the box. The pinion gear is attached to the second little crank, and the whole thing is on the sliding frame. The prism is large, around 1 ¼” on a side and at least as tall. The slits are double edged Gillette Blue Blades. 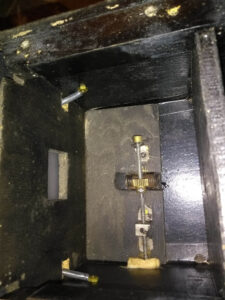 home made rack and pinion focuser. 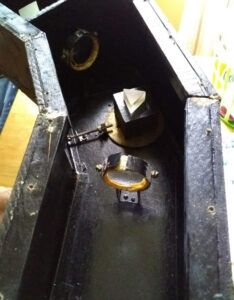 This must have been the pride of someone’s home lab. I had guessed 1940s by the Erector Set parts, and components from the other things that came with the spectrograph. (more on those later) There was cloth tape on the glass that I recognised from WW2 vehicles, and was available in hardware stores, the prism too matched those used in tank periscopes, though shortened. I struck out looking through handyman and science mags of the era, like Popular Science for possible plans.. I struck out alright. Nothing. Perhaps I was off with the date?

I was off, by 20 years. Did you know people collect double edge razor blades? Neither did I. The Gillette Blueblade was introduced in the 1920s. The logo on the blades I have are different from the 1920s versions. There IS a patent number on the blade, so a quick search told me that this particular blade was patented in 1948. Well, the dispenser  for the blade was. Following the blade collector wiki I finally matched the logo to the era: 1963. Now I can begin searching for any plans that may have been published. 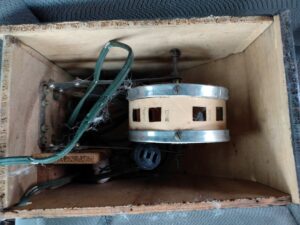 There were two other items included with the spectrograph, a lens mounted in a holder the same height as the slits, and a box with a motor, sample drum, and a lightbulb. The drum is paper, and is labeled with various salts, MgSO4, NaCl, and etc. The windows cut in the drum near the labels are empty, so I don’t know how the samples were held in. there doesn’t seem to be any adhesive residue. The lights were simple outdoor Christmas tree lights, as indicated by the sockets.

Was this a science fair project? Possibly, as a sample drum would allow different spectra to be displayed. Did someone build this to use for amateur spectrographic work? That too is a possibility. Though there are no scales to measure with, nor is the prism deflection angle marked. Whatever the reason this was built, it serves as a great example of amateur science, and what could be built at home using radially available materials. This spectrometer stands proud in my collection next to a small direct vision SC made by John Browning in the 1800s.

The birth of Astrophotography