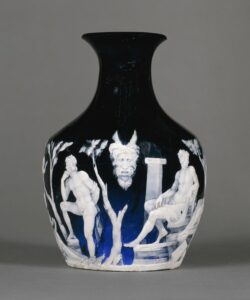 astronomers. Since Hellenistic times, glass was all but taken for granted. Sure, it was expensive early on, but it was everywhere. Starting with beads, then mosaic tile and vessels. By the 1st century B.C. The Roman Empire had developed fairly consistent recipes for glass manufacturing. The apex of this was the development of blown glass. More on why this is important later. I could write pages on Roman glass, but I’ll just leave this here: The Portland Vase, layered and hand cut between 5 and 25 A.D.

After the Empire collapsed some 300 years later, Europe was losing the ability to manufacture glass. The local masters were dying out, and the Venetians were clamping down hard on their secrets. They had also clamped down on the supply of natron, the flux used in Roman glass making.  They inherited the glass business, and had cornered the market. For the time being, Europe would make do with so called Forrest Glass. Made in glass houses scattered throughout the continent. So called because they were in close proximity to the fuel source: wood. This was fair quality glass, but it wasn’t clear and there was a learning curve as a replacement flux was discovered. The impurities added green or brown colour to the product. The Venetian glass could be clear as water, and this along with the now centuries old technique of glassblowing could make something special: the convex lens.

By 1280, the glass makers of Venice (who were by this point isolated on an island to prevent them from a) leaving or getting kidnapped,

and b) burning down the city) were manufacturing eyeglasses**. These spectacles were for helping those with feeble vision, or who were far-sighted much like today’s reading glasses. By 1466 they were being produced on an almost industrial scale. The Duke of Milan ordered 200 pair in various strengths to last him the rest of his life, and have enough to give out to those who needed them!

Considered the father of modern optics, Alhazen. from 1001 inventions

Optics theory has been around since ancient Greece, and the Kitab al-manazir (Book of Optics)  was written in the 900s by Alhazen based on observation and mathematics. These works, combined with the ability to make and grind consistent quality lenses led to turning theory into product. Those with means could experiment on their own. In 1608, a Dutch optician, Hans Lippershey patented the first telescope after observing children playing with a set of convex and concave lenses. This telescope had a 3x magnification.

I’m going to stop this chapter here, because I need to mention the massive resources glass consumed. Even today the US uses 200 TRILLION BTUs per year making glass. That is about half the industrial energy used per year. It was no different back in time. Limits were placed on production due to deforestation, and it wasn’t until coal started being used in the 1600s in England that glass making really took off.  Glass was an artisan product and its secrets were closely guarded. Fortunately, the use of coal, and the the invention of the telescope overlap.

**lenses had been known since antiquity, What is mentioned here was the start of  spectacles for the common person on a large scale.

The birth of Astrophotography