The following I wrote for a talk given to the The Naperville Astronomical Association on November 4th of this year. 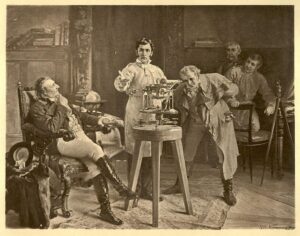 ating the first pregummed stamps, and a process for mechanically folding envelopes. He was also a gentleman scientist. You see, back in the early days of the industrial revolution and before, much of the scientific knowledge was attained by the upper class. There were, naturally university positions that were designed for research, but those were in a specific area of study. The wealthy members of learned societies were able to fund their own research and collaborate with each other. That is not to say they were solely responsible for breakthroughs, for instance Joseph Fraunhofer was a glassmaker, who through calamity followed by good fortune was able to invent, among other things a polishing machine for large objectives, and the spectroscope.

Astronomy was a costly endeavor. For example a 6” speculum mirror outfit cost 88 Pounds Sterling in 1864. In 1860 London, an artisan made 14 Shillings a week. (20 to a Pound. ) This is only £36/4s. Per year. This was an OK living wage. Sailors made 15s.  Weekly, and an Army 1st Lieutenant £200 yearly.  Mind you, officers were still aristocracy at this time. Then you needed a place to set up. Dark skies were not an issue, (sigh) but you really wanted such an expensive item in an enclosed place. Gentlemen who owned them likely had their own observatory. Some who were prolific observers could be offered a move into a proper astronomical society observatory. This happened with Bond and Draper.

Once the telescope was had, you could start making observations. For many, this was not enough. Detailed sky surveys were made and compared, comets discovered, and even new planets. The issue was, the sketches that, no matter how masterfully drawn subjective. Two people observing the same crater on the moon would make slightly different depictions. This was a well understood issue, and some were known for having the most accurate hand. Photography changed this. They now had irrefutable depictions of the heavens. The issue now was how adept of a photographer they were. Many, like Herschel and Draper were photographers as well, however many others like De La Rue were not, the latter honed their skill under the observatory dome.

Louis Daguerre, the French Diorama maker and painter was quite skilled at his craft, that of theatre illusion. He partnered with Nicéphor Niépce the inventor who was able to produce a Heliograph, the direct ancestor to the modern photograph. This didn’t use halides, rather the process in which bitumen pitch hardens at a different rate when exposed to sunlight. In 1822 he created what is now the oldest photograph. It should be mentioned that there had been earlier attempts. Paper coated 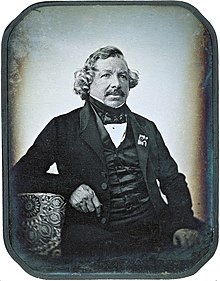 with Silver salts had been used to produce negative images as early as the late 1700s, but they soon faded when exposed to the faintest light. I will also note that Henry Talbott was in the same circles and discovered a process just after Daguerre published his results.

The problem was permanence of the image. After Niépce passed, Daguerre continued his work and by 1839 had come up with a process in which polished fine Silver was sensitized over Iodine crystals, developed with Mercury and fixed with salt water. This process was patented, the patent bought by the French government, and publicly released “for the good of all men”.

After a short time, John Herschel suggested that hyposulphite of soda be used to fix the image. He also helped spread the phrase “photograph”. (I believe due in part because it is easier to say than Heliograph.) Soon after the unveiling of the process it was discovered that Bromine could be used in addition to the iodine and make the    process much faster. 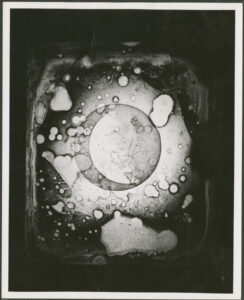 In bright sun, without bromine, an image can be struck in about a minute, with the quickener (bromine) the time can be as much as quartered. This soon became standard practice all over the world. In March of 1840 John Draper (who was a driving force making the improvements mentioned above, and correspondent with Herschel) attached a plate to his telescope and took the first photograph of something not on Earth; the Moon.  In fact, with the aid of his sons he pioneered many methods of celestial photography. His Son, Henry, carried on his father’s work.

The second body to be photographed was much more difficult; the Sun. The issue was that even with an ISO of around .003, the Daguerreotype is too fast to take a picture without infrastructure. The naked Sun was shown in all its glory in 1845. The French scientists Leon Foucault and Louis Fizeau used similar processes as Draper with a 1/60th second exposure.  Eclipses were easier, being the same brightness of a full moon. The first eclipse was captured in July of 1851. This inspired Warren De la Rue, Airy, and Secchi  7 years later to hunt for the Solar Corona. William Cranch Bond, using the new Great Refractor at Harvard photographed the first star, Vega in 1859. His son George Phillips Bond led the way to scientific analysis of stars with the procedures he developed. 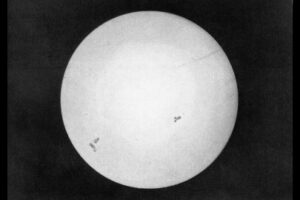 First photo of the sun where detail can be seen,

By this time, the 1850s, the Daguerreotype was firmly established as THE method of portraiture. (painters would debate this point, but the speed and relatively lower cost of the photographic medium meant more people could buy them).  There was a new rising star, however. In 1851, Frederick Scott Archer published his work on a new form of photography; the Collodion process.

Many times faster than the Daguerreotype, this process could produce negative images on glass, which if under exposed could be used as positive images. This proved an advantage for many reasons. Glass plates were far cheaper and easier to keep in usable condition, The chemistry was friendlier to the lungs, and the time required to prepare a plate was considerably reduced. Most importantly for our budding hobby of celestial photography as it was known copies could be made on sensitized paper in infinite quantity.

There were drawbacks, pinholes in the collodion layer could ruin an image if it obscured a subject. There was a limited exposure time as the plate could dry out before the exposure was finished. It was, however like the Daguerreotype grainless and methods of plate preparation were soon developed to address any issues. One more point, if the telescope was to be dedicated to making images, often the lens would be calibrated to the chemical focus, rather than optical. This means that it was achromatic, but more towards the blue end of the spectrum, rather than the middle. This was due to the photo processes of the day being more sensitive to that region. Panchromatic emulsions were not around until 1906. 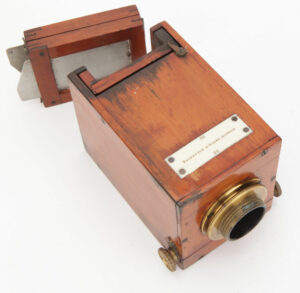 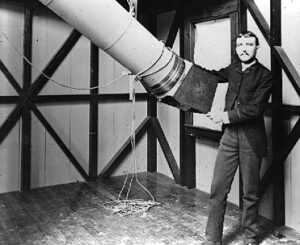 There were many ideas developed on how to expose the plates, or rather turn the telescope into a camera. One was to simply clamp the plate to the tube, another to make a camera with the telescope as a lens. More importantly was to keep the object in the same spot on the plate, tracking. Tracking must be smooth, and not shake the tube. 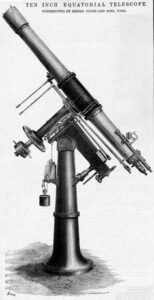 There were different solutions to this as well, fine clockwork, both spring and weight driven were devised. One that I like was devised by Draper’s sons. Instead of the telescope moving, the 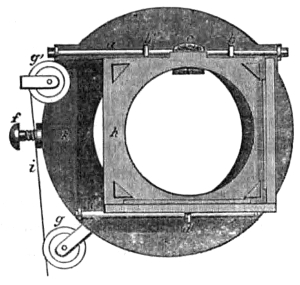 plate did. As the object moved across the field the holder, powered by a water clock (of all things) moved with it. Exposures of over 90 seconds could be had. Finally, the telescope could be built as a camera, as is still often done.

In the 1870s, the dry plate process was invented. This made glass negatives like collodion, but there was no time limit to the exposures. In addition many plates could be made up at a time and developed at the astronomer’s leisure. This led to the first deep sky photography. In 1880 Draper photographed the Orion Nebula. Over a short span of years, the speed of the emulsion was increased, leading to greater discoveries, both inside and far from our solar system.

Addendum: To the reader, Draper’s first photo of the Moon doesn’t seem like much. As someone who practices this process, I can imagine the sheer glee he felt when he finally got an image. Daguerreotype plates are still time consuming to make. I have attached a much better, and slightly later image of the Moon taken by Whipple, and another, more modest example taken by the author. 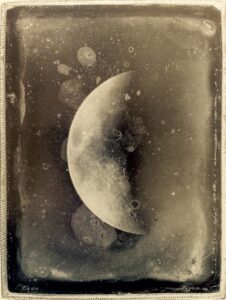 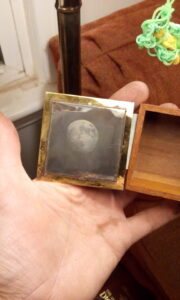