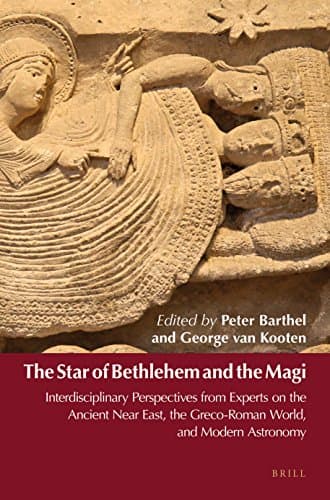 This 2015 book, edited by Peter Barthel and George van Kooten, is subtitled Interdisciplinary Perspectives from Experts of the Ancient Near East, the Greco-Roman World, and Modern Astronomy, and the book’s nearly 700 pages indeed do include all sorts of scholarly perspectives regarding the Star of Bethlehem.  Those with interest in the Star will find here much to satisfy their interest.  From the publisher, Brill:

This book is the fruit of the first ever interdisciplinary international scientific conference on Matthew’s story of the Star of Bethlehem and the Magi, held in 2014 at the University of Groningen, and attended by world-leading specialists in all relevant fields: modern astronomy, the ancient near-eastern and Greco-Roman worlds, the history of science, and religion. The scholarly discussions and the exchange of the interdisciplinary views proved to be immensely fruitful and resulted in the present book. Its twenty chapters describe the various aspects of The Star: the history of its interpretation, ancient near-eastern astronomy and astrology and the Magi, astrology in the Greco-Roman and the Jewish worlds, and the early Christian world – at a generally accessible level. An epilogue summarizes the fact-fiction balance of the most famous star which has ever shone.

Appealing to the Infinite: Philips Lansbergen and the Battling Star-Armies of God

Illuminating North America! (or, Anna and Fernando Find a Star)

The Sun’s Many Strange Neighbors (re-run)

The Sun’s Many Strange Neighbors