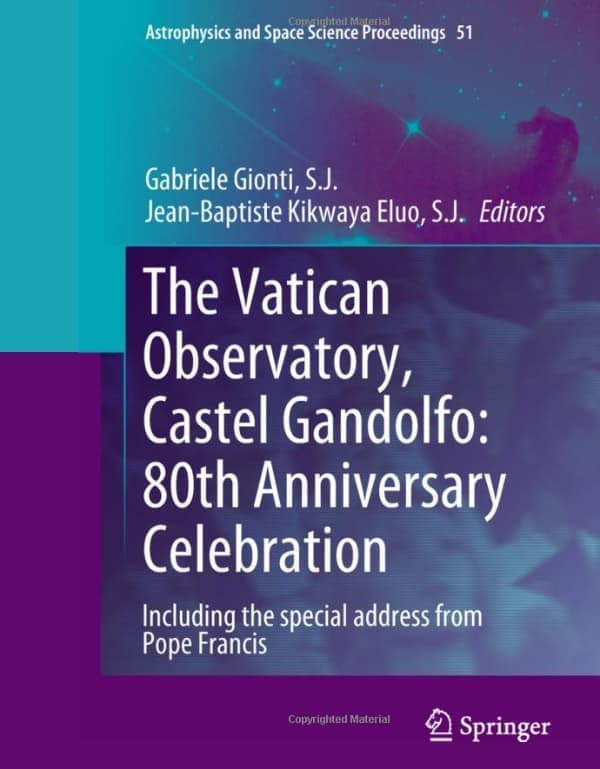 This book was edited by Vatican Observatory astronomers Gabriele Gionti, S. J., and Jean-Baptiste Kikwaya Eluo, S.J., and published in 2018 by Springer.  It includes articles on a variety of topics related to the Vatican Observatory, its history, and the work of its astronomers.  These topics include the Leap Second Debate, a historical telescope, cosmology, near Earth objects, outreach to the popular press, philosophy, stellar and galactic astronomy, and more. From the publisher:

This book presents contributions from an internal symposium [September 2015] organized to celebrate the 80th anniversary of the Specola Vaticana, or Vatican Observatory, in the Papal Palace of Castel Gandolfo. The aim is to provide an overview of the scientific and cultural work being undertaken at the Observatory today and to describe the outcomes of important recent investigations. The contents cover interesting topics in a variety of areas, including planetary science and instrumentation, stellar evolution and stars, galaxies, cosmology, quantum gravity, the history of astronomy, and interactions between science, philosophy, and theology.

On September 29, 1935, Pope Pius XI officially inaugurated the new headquarters of the Specola Vaticana at Castel Gandolfo. With new telescopes, a new astrophysical laboratory for spectrochemical analysis, and a young staff comprising Jesuit scientists, this inauguration marked the beginning of an intense period of scientific achievements at the Observatory. This anniversary book, featuring contributions from members of the current Observatory staff and adjunct scholars, will appeal to all with an interest in the history of the Specola Vaticana and its significance for astronomy.